The Canada Goose (Branta canadensis), colloquially Canadian Goose in North America, belongs to the Branta genus of geese, which contains species with largely black plumage, distinguishing them from the grey Anser species. The species name, canadensis, is a New Latin word meaning "of Canada".

The black head and neck with white "chinstrap" distinguish this goose from all except the Barnacle Goose, but the latter has a black breast and grey, rather than brownish, body plumage. There are up to 12 subspecies of this bird, of varying sizes and plumage details, but all are recognizable as Canada Geese. 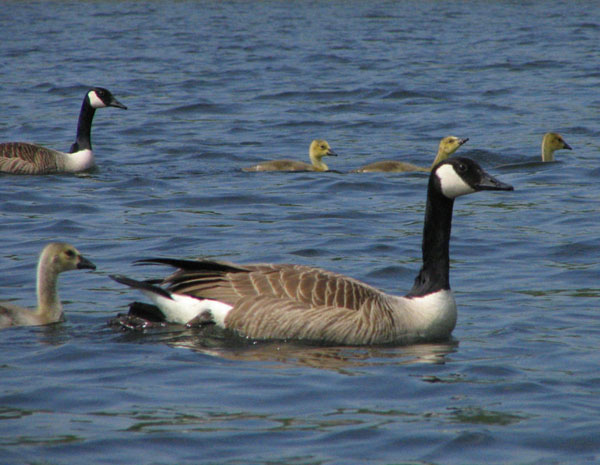 The small races, for example B. c. minima, are now considered by many authorities to be a separate species, known in North America as the Cackling Goose, B. hutchinsii, distinct from the larger subspecies which remain as Canada Goose. This new species is also referred to as Small Canada Goose or as Lesser Canada Goose, and the remaining large races as Greater Canada Goose, although this has the potential to cause some confusion as the name Lesser Canada Goose has also been applied to the race parvipes, which is a member of the group of large subspecies.

This well-known species is native to North America. It breeds in Canada and the northern USA in a variety of habitats. However, the nest is usually located in an elevated area near water, sometimes on a beaver lodge. The eggs are laid in a shallow depression lined with plant material and down. Males, 8–14 pounds (3.5–6.5 kg), can be very aggressive in defending territory. A pair may mate for life (around 20 years). The female looks virtually identical but is slightly lighter (7–12 pounds, 3–5.5 kg), and has a different honk.

Like most geese, it is naturally migratory, the wintering range being most of the USA. The calls overhead from large groups of Canada Geese flying in V-shaped formation signal the transitions into spring and fall. In some areas, migration routes have changed due to changes in habitat and food sources. In mild climates, such as the Pacific Northwest, due to a lack of former predators, some of the population has become non-migratory. Some migratory populations in temperate climates frequent cities as well, due to convenient, predator-free open spaces. These birds are considered by many to be a nuisance, mainly because of the large volume of feces they produce, and some cities have begun extermination programs against them. 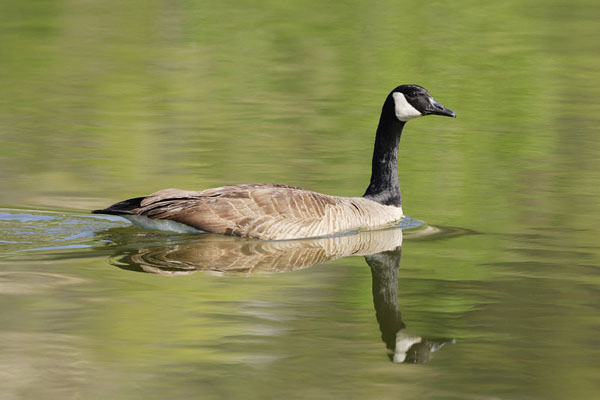 Canada Geese of both species have reached western Europe naturally, as has been proved by ringing recoveries. The birds are of at least the following subspecies - parvipes and hutchinsii, and possibly others. Canada Geese are also found naturally on the Kamchatka Peninsula in eastern Siberia, eastern China, and throughout Japan.

Greater Canada Goose has also been widely introduced in Europe, and have established feral populations in Great Britain, The Netherlands and Scandinavia. Semi-tame feral birds are common in parks, and have become a pest in some areas. Interestingly, it is now proved that most Scandinavian and some British birds have established a migration pattern.

These birds feed mainly on plant material. When feeding in water, they submerge their heads and necks to reach aquatic plants, sometimes tipping forward like a dabbling duck. Flocks of these birds often feed on leftover cultivated grains in fields, especially during migration or in winter. They also eat some insects, molluscs and crustaceans. 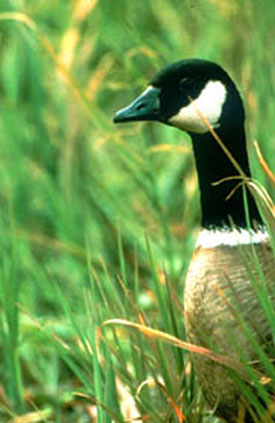 By the early 20th century, over-hunting and loss of habitat had resulted in a serious decline in the numbers of this bird in its native range. With improved game laws, their populations have recovered in most of their range, although some local populations may still be declining. They have adapted well to urban environments, especially those with well-trimmed lawns and large ponds, such as golf courses and city parks.

This article is licensed under the GNU Free Documentation License. It uses material from the Wikipedia article "Canada Goose".