The animal Alces alces, called the moose in North America and the elk in Europe (see also elk for other animals called elk) is the largest of all the deer family Cervidae, distinguished from other members of Cervidae by the form of the antlers of its males. These arise as cylindrical beams projecting on each side at right angles to the middle line of the skull, which after a short distance divide in a fork-like manner. The lower prong of this fork may be either simple, or divided into two or three tines, with some flattening. The word "moose" is thought to be from mus or moos of the Algonquian (northern American Indian) family of languages. The name means "twig eater." 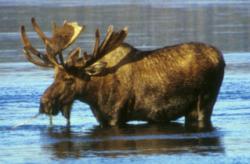 In the East Siberian race of the elk (Alces alces bedfordiae) the posterior division of the main fork divides into three tines, with no distinct flattening. In the common elk (Alces alces alces), on the other hand, this branch usually expands into a broad palmation, with one large tine at the base, and a number of smaller snags on the free border.

There is, however, a Scandinavian phase of the common elk in which the antlers are simpler, and recall those of the East Siberian race.

The palmation appears to be more marked in the North American race, the moose (Alces alces americanus) than in the typical Scandinavian elk. The largest of all is the Alaskan race (Alces alces gigas), which stands 2.5 m (8 ft) in height, with a span of 1.8 m (6 ft) across the antlers.

The great length of the legs gives a decidedly ungainly appearance to the moose. The muzzle is long and fleshy, with only a very small triangular naked patch below the nostrils; and the males have a peculiar sac, known as the bell, hanging from the neck. From the shortness of their necks, moose are unable to graze, and their chief food consists of young shoots and leaves of willow and birch, and waterplants (such as Arnicus brucitus). These ruminants are often found feeding in wetlands in temperate climes. 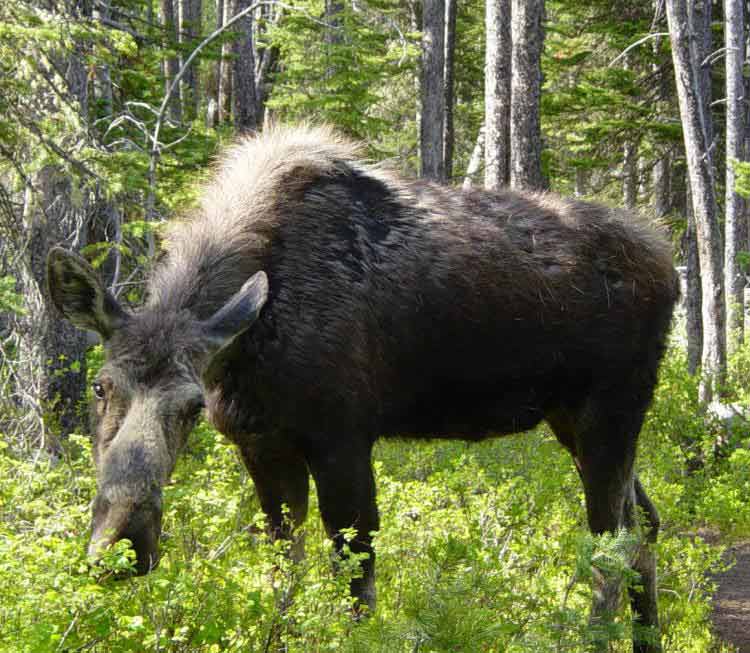 Although generally timid, the males become very bold during the breeding season, when the females utter a loud call, which can be heard from up to 3.2 kilometers away, and are often mistaken for lowing cattle; and at such times they fight both with their antlers and their hoofs. Fierce clashing of antlers between males is also not uncommon. U.S. President Theodore Roosevelt was referring to this behavior when he said "I am as strong as a bull moose" (some accounts say "fit as a bull moose"). Because of this, Roosevelt's Progressive Party became popularly known as the "Bull moose Party". As well as letting out bellows, the female moose emits a strong odor in order to attract a male to mate. She also secretes a special chemical in her urine which lets the male know that she is ready to mate.

The usual pace is a shambling trot, but when pressed moose can break into a gallop. The female gives birth to one or two young at a time, which are not spotted. The gestation period for a moose is about 216-240 days. After the young are born, they drink the mother's milk, which is very high in fat and other nutrients. Because of the milk, the calf grows very fast. 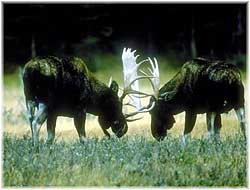 The female moose is reported to kill more people in Canada than any other animal (far exceeding the toll of the grizzly bear). These large animals can be extremely protective of their young, and caution should be exercised when approaching a cow moose.

In North America, during the winter one male and several females may form a "moose-yard" in the forest, which they keep open by trampling the snow. In the spring, moose can often been seen in drainage ditches at the side of roads, taking advantage of road salt which has run off the road. These minerals replace electrolytes missing from their winter diet.

The clearing of the northern forests has led to the range of the White-tailed deer expanding northward. Where their ranges overlap, moose become infected by parasites carried by the deer such as brain worm, Parelaphostrongylus tenuis, and winter ticks, Dermacentor albipictus, which can be fatal to the moose population.

In Western culture, the moose is often depicted as a laconic, good-natured and not terribly bright creature. Bullwinkle of The Rocky and Bullwinkle Show, an animated television series, is the most famous example.

A moose's body structure, with a large heavy body suspended on long spindly legs, makes these animals particularly dangerous when hit by motor vehicles. Such collisions are often fatal for both the moose and motorist. This has led to the development of a vehicle test in Scandinavia referred to as the "moose test" (Älgtest).

This article is licensed under the GNU Free Documentation License. It uses material from the Wikipedia article "moose".