The War of 1812 was a conflict fought in North America between the United States and Great Britain from 1812 to 1815. In British texts, the War of 1812 is sometimes known as the British-American War, to distinguish it from the concurrent British involvement in the Napoleonic Wars. Napoleon's invasion of Russia in 1812 is also sometimes referred to as the "War of 1812."

Although the United States was officially at war with Great Britain, more than half of the British forces were made up of Canadian militia. Additionally, many Native Americans/First Nations fought in the war for reasons of their own.

Although the War of 1812 ended in a stalemate and is often only dimly remembered, the war had many effects on the futures of those involved. The war created a greater sense of nationalism in Canada and the United States, it produced a national anthem and two future presidents for the U.S., and perhaps most consequentially, the war marked the end of European alliances with American Indians in the United States. 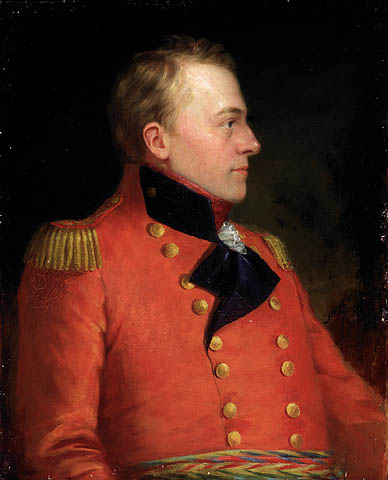 Major General Sir Isaac Brock skillfully repulsed an American invasion of Canada, but his death was a severe loss for the British cause.

The American people had assumed that Canada could be easily overrun. Former U.S. President Thomas Jefferson dismissively referred to the conquest of Canada as "a matter of marching." However, in the opening stages of the conflict, British military experience prevailed over inexperienced American commanders. The American Brigadier General William Hull invaded Canada on July 12, 1812 from Detroit, with an army mainly composed of militiamen. British Major General Isaac Brock drove back the Americans and, with the aid of Tecumseh, forced Hull to surrender at Detroit on August 16.

Brock promptly transferred himself to the eastern end of Lake Erie, where the American General Henry Dearborn was attempting a second invasion. Brock fell in action on October 13 at the Battle of Queenston Heights. While the professionalism of the American forces would improve by the war's end, British leadership suffered after Brock's death.

In contrast to the American militia, the Canadian militia performed well. French-Canadians, who found the anti-Catholic stance of most of the United States troublesome, and United Empire Loyalists, who had fought for the Crown during the American Revolutionary War and had settled primarily in Upper Canada, strongly opposed the American invasion. However, a large segment of Upper Canada's population were recent settlers from the United States who had no such loyalties to the Crown, but American forces found, to their dismay, that most of the colony took up arms against them.

After Hull's surrender, General William Henry Harrison was given command of the American Army of the Northwest. He set out to retake Detroit, which was now defended by Colonel Henry Proctor in conjunction with Tecumseh. A detachment of Harrison's army was defeated at Frenchtown along the River Raisin on 22 January 1813. Proctor left the prisoners in custody of the Native Americans, who then proceeded to execute 60 American prisoners, an event which became known as the "River Raisin Massacre." The defeat ended Harrison's campaign against Detroit, and the phrase "Remember the River Raisin" became a rallying cry for the Americans.

Because of the difficulties of land communications, control of the Great Lakes and the Saint Lawrence River corridor was crucial, and so both sides spent the winter of 1812-13 building ships. The Americans, who had far greater shipbuilding facilities than the British, nevertheless allowed themselves to fall behind.

On April 27, 1813, American forces attacked and burned York (present Toronto), the capital of Upper Canada. However, Kingston was strategically more valuable, and vital to British supply and communications along the St. Lawrence. Without control of Kingston, the American navy could not effectively control Lake Ontario or sever the British supply line to Quebec.

On Lake Ontario, Sir James Lucas Yeo took command on 15 May 1813 and created a more mobile though less powerful force than the Americans under Isaac Chauncey. Three engagements in August and September led to no decisive result. By the close of the war Yeo had constructed a ship of 102 guns which gave him superiority, and the British became masters of Lake Ontario. The burning by the American General McClure, on December 10, 1813, of Newark (Niagara-on-the-Lake), led to British retaliation (and similar destruction) at Buffalo, on December 30, 1813. 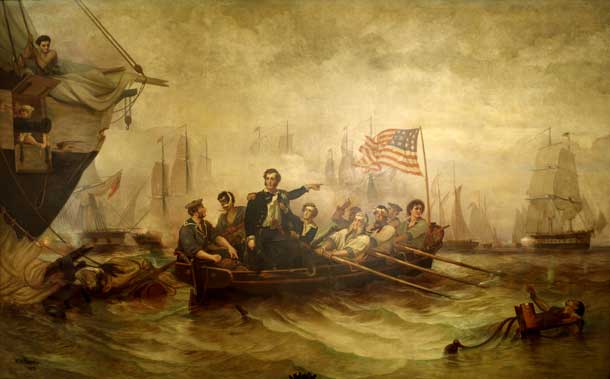 On Lake Erie, the American commander Captain Oliver Hazard Perry fought the Battle of Lake Erie on September 10, 1813. His decisive victory ensured American control of the lake, improved American morale after a series of defeats, and compelled the British to fall back from Detroit. This paved the way for General Harrison to launch another invasion of Canada, which culminated in the U.S. victory at the Battle of the Thames on October 5, 1813, in which Tecumseh was killed. Tecumseh's death effectively ended the Native American alliance with the British.

In October and November 1813, two American thrusts against Montreal were defeated - one by a force of British regulars and Canadian Militia at Crysler's Farm to the west of the city on the Saint Lawrence River; the other by a force of mostly French Canadian militia with some Mohawks under the command of a native son, Charles de Salaberry at Chateauguay to the south of the city on the Richelieu River.

In October of 1813, American Major-General Wade Hampton marched from Lake Champlain towards the Saint Lawrence River. The initial plan was for Hampton to join up with Wilkinson attacking on the Saint Lawrence. On October 25, 1813, Hampton's 4,000-strong force was defeated near Chateauguay by de Salaberry's force of less than 500 French-Canadian Voltigeurs and Mohawks.

U.S. General James Wilkinson planned to attack Montreal from the west, leaving with a fleet from Sackett’s Harbor on Lake Ontario. The British under Captain William Mulcaster chased him, and by November 10 Wilkinson was forced to land near John Crysler's farm outside of Morrisburg, Ontario on the Saint Lawrence River, about 150 kilometers from Montreal. The British force under Colonel Joseph Morrison only had 800 men while Wilkinson had 8,000. Wilkinson was defeated on November 11 and retreated back to the US.

By 1814, American generals, including Major Generals Jacob Brown and Winfield Scott, had drastically improved the fighting abilities and discipline of the army. Their attack on the Niagara peninsula led to hot fighting at the Battle of Chippewa on July 5 and Lundy's Lane on July 25. The first was a success for the Americans, but in the second battle the Americans suffered high casualties and were forced to withdraw across the Niagara. They later resisted British and Canadian forces at the Siege of Fort Erie, and briefly held the fort. They were compelled to cross the border due to low provisions.

Meanwhile, veteran British troops no longer needed in Europe began arriving in North America. Governor-General Sir George Prevost now had enough men to launch an offensive into the United States. He hoped to gain a significant victory in order to give Britain bargaining power in the ongoing peace negotiations. However, his invasion was repulsed in the Battle of Lake Champlain on September 11, 1814.

This article is licensed under the GNU Free Documentation License. It uses material from the Wikipedia article "Canada".