Thomas Edward Lawrence (August 16, 1888 – May 19, 1935), also known as Lawrence of Arabia, and (apparently, among his Arab allies) Aurens or Al-Aurens, became famous for his role as a British liaison officer during the Arab Revolt of 1916–1918. His very public image was in some part the result of U.S. traveller and journalist Lowell Thomas's sensationalized reportage of the Revolt, as well as Lawrence's autobiographical account, Seven Pillars of Wisdom. Many Arabs consider him a folk hero for promoting their cause for freedom from both Ottoman and European rule; likewise, many Britons count him among their country's greatest war heroes.

Lawrence was born in Tremadoc, Caernarfonshire, North Wales, of mixed English and Irish ancestry. His father, Thomas Chapman, was a minor member of the nobility who had escaped a tyrannical wife to live with a maid, with whom he had five sons in close succession. Lawrence was educated at Jesus College, Oxford, from where he graduated with First Class Honours largely on account of a highly-acclaimed thesis entitled The influence of the Crusades on European Military Architecture – to the end of the 12th century.

On leaving university he commenced a postgraduate degree in mediaeval pottery, which he soon abandoned after he was offered the opportunity to become a practicing archaeologist in the Middle East. In December 1910 he sailed for Beirut, and on arrival went to Jbail (Byblos) where he studied Arabic. He then went to work on the excavations at Carchemish near to Jerablus in the northern part of Syria, where he worked under D.G. Hogarth and R. Campbell-Thompson.

In the late summer of 1911 he returned to England for a brief sojourn and, by November, he was back en route to Beirut. Prior to returning to work at Carchemish he worked briefly with William Flinders Petrie at Kafr Ammar in Egypt. At Carchemish he was to work with Leonard Woolley. He continued making trips to the Middle East as a field archaeologist until the outbreak of World War I. His extensive travels through Arabia, his excursions, often on foot, living with the Arabs, wearing their clothes, learning their culture, language and local dialects, were to prove invaluable during the conflict.

In January 1914 Woolley and Lawrence were co-opted by the British military as an archaeological smokescreen for a British military survey of the Sinai peninsula. At this time Lawrence visited Aqaba and Petra. From March to May, Lawrence worked again at Carchemish. Following the outbreak of hostilities in August 1914, on advice from S.F. Newcombe, Lawrence did not enlist immediately, but held back until October. 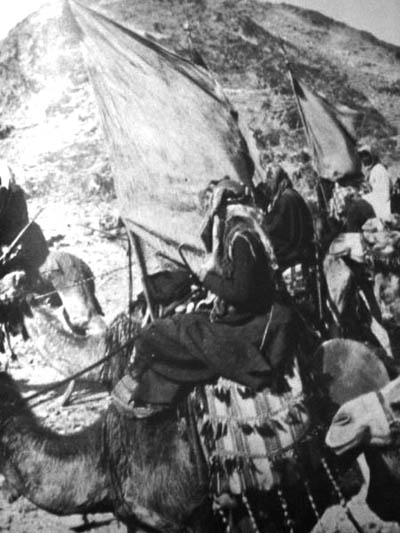 Once enlisted he was posted to Cairo, where he worked for British Military Intelligence. Lawrence's intimate knowledge of the Arab people made him the ideal liaison between British and Arab forces and in October 1916 he was sent into the desert to report on the Arab nationalist movements. During the war, he fought with Arab irregular troops under the

command of Emir Feisal, a son of Sherif Hussein of Mecca, in extended guerrilla operations against the Ottoman Empire. Lawrence's major contribution to World War I was convincing Arab leaders to coordinate their revolt to aid British interests. He persuaded the Arabs not to drive the Ottomans out of Medina, thus forcing the Turks to tie up troops in the city garrison. The Arabs were then able to direct most of their attention to the Hejaz railway that supplied the garrison. This tied up more Ottoman troops, who were forced to protect the railroad and repair the constant damage. In 1917 Lawrence arranged a joint action with the Arab irregulars and forces under Auda Abu Tayi (until then in the employ of the Ottomans) against the strategically-located port city of Aqaba. On July 6, after a daring overland attack, Aqaba fell to Arab forces. In November he was recognised at Dara while reconnoitering the area in Arab dress and was apparently sexually assaulted by the (male) Turkish garrison before he was able to escape (Encyclopædia Britannica, 2003). Some 12 months later, Lawrence was involved in the capture of Damascus in the final weeks of the war.

As he did before the war, during the time he spent with the Arab irregulars, Lawrence adopted many local customs and traditions as his own, and soon became a close friend of Prince Feisal. He especially became known for wearing white Arabian garb (given to him by Prince Feisal, originally wedding robes given to Feisal as a hint) and riding on a horse in the desert. During the closing years of the war he sought to convince his superiors in the British government that Arab independence was in their interests, to mixed success.

Immediately after the war Lawrence worked for the British Foreign Office, attending the Versailles Paris Peace Conference, 1919 between January and May as a member of Feisal's delegation. Through most of 1921 he served as an advisor to Winston Churchill at the Colonial Office. 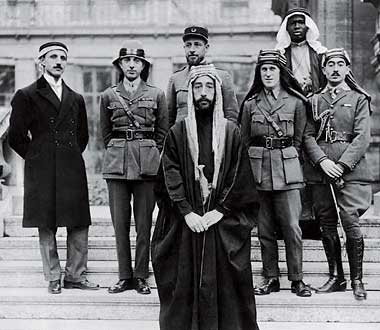 Starting in 1922 he attempted to achieve anonymity, joining the Royal Air Force under the name "Ross". His cover was soon blown, however, and he was forced out of the RAF, changed his name to "Shaw", and in 1923 joined the Royal Tank Corps. He was unhappy there and repeatedly petitioned to rejoin the RAF, which petitions finally bore fruit in August 1925. A fresh burst of publicity resulted in his assignment to a remote base in what is now Pakistan in mid-1927, where he remained until the beginning of 1929. He continued serving in the RAF, specializing in high-speed boats and professing happiness, leaving with considerable regret in early 1935. A few months later he died at the age of 46 in a Brough Superior motorcycle accident in Dorset.

This article is licensed under the GNU Free Documentation License. It uses material from the Wikipedia article "Thomas Edward Lawrence".