Alexander III (late July, 356 BC–June 10, 323 BC), commonly known as Alexander the Great, in Greek "Megas Alexandros", King of Macedon (336 BC-323 BC), was one of the most successful military commanders of the ancient world. Following the unification of the multiple city states of Ancient Greece under the rule of his father, Philip II of Macedon, Alexander conquered the Persian Empire, including Anatolia, Syria, Egypt, Bactria and Mesopotamia, and extended the boundaries of his own empire as far as India. Alexander integrated non-Greeks into his army and administration, leading some scholars to credit him with a “policy of fusion.” After twelve years of constant military campaigning, Alexander died, probably of malaria or typhoid. His conquests ushered in centuries of Greco-Macedonian settlement and rule over non-Greek areas, a period known as the Hellenistic Age. Alexander himself lived on in the history and myth of both Greek and non-Greek peoples. Already during his lifetime, and especially after his death, his exploits inspired a literary tradition in which he appears as a towering legendary hero in the tradition of Achilles.

Alexander was the son of King Philip II of Macedon and of Epirote princess Olympias. According to Plutarch (Alexander 3.1,3), Olympias was impregnated not by Philip, who was afraid of her and her affinity for sleeping in the company of snakes, but by Zeus. Plutarch (Alexander 2.2-3) relates that both Philip and Olympias dreamt of their son's future birth. Olympias dreamed of a loud burst of thunder and of lightning striking her womb. In Philip's dream, he sealed her womb with the seal of the lion. Alarmed by this, he consulted the seer Aristander of Telmessus, who determined that his wife was pregnant and that the child would have the character of a lion. Aristotle was Alexander's tutor; he gave Alexander a thorough training in rhetoric and literature and stimulated his interest in science, medicine, and philosophy.

After his visit to the Oracle of Ammon at Siwah, according to all five of the extant historians (Arrian, Curtius, Diodorus, Justin, and Plutarch), rumors spread that the Oracle had revealed Alexander's father was Zeus, rather than Philip. According to Plutarch (Alexander 2.1), his father descended from Heracles through Caranus and his mother descended from Aeacus through Neoptolemus and Achilles.

When Philip led an attack on Byzantium in 340 BC, Alexander, aged 16, was left in command of Macedonia. In 339 BC Philip divorced Alexander's mother, leading to a quarrel between Alexander and his father which threw into question Alexander's succession to the Macedonian throne. In 338 BC, Philip created The League of Corinth. Alexander also assisted his father at the decisive battle of Chaeronea in this year. In 336 BC, Philip was assassinated at the wedding of his daughter Cleopatra to King Alexander of Epirus. The assassin was supposedly a former lover of the king, the disgruntled young nobleman (Pausanias), who held a grudge against Philip because the king had ignored a complaint he had expressed. His murder was once thought to have been planned with the knowledge and possible involvement of Alexander or Olympias, but in recent years Alexander's involvement has been questioned, and there is some reason to believe that it may have been instigated by Darius III Codomannus, the recently crowned King of Persia. Plutarch mentions an irate letter from Alexander to Darius III, where Alexander blames Darius and Bagoas for his father's murder, stating that it was Darius who had been bragging to the rest of the Greek city states how he managed to have Philip assassinated.

After the death of Philip, Alexander, then aged 20, was acclaimed by the army as the new king of Macedon. Greek cities like Athens and Thebes, which had pledged allegiance to Philip were not quick to pledge it to a 20-year-old boy. He immediately ordered the execution of all of his potential rivals and marched south with his armies in a campaign to solidify control of Greece and confront the Persian Empire.

Alexander's army crossed the Hellespont with about 40,000 Greek and Macedonian soldiers. After an initial victory against Persian forces at the Battle of Granicus, Alexander accepted the surrender of the Persian provincial capital and treasury of Sardis and proceeded down the Ionian coast. At Halicarnassus, Alexander successfully waged the first of many sieges, eventually forcing his opponents, the mercenary captain Memnon of Rhodes and the Persian satrap of Caria Orontobates to withdraw by sea. Alexander left Caria in the hands of Ada, the sister of Mausolus, whom Orontobates had deposed. From Halicarnassus, Alexander proceeded into mountainous Lycia and the Pamphylia plain, asserting control over all coastal cities and denying them to his enemy. From Pamphylia onward the coast held no major ports, so Alexander moved inland. At Pisidian Termessus Alexander humbled but did not storm the city. At the ancient Phrygian capital of Gordium, Alexander "undid" the tangled Gordian knot, a feat said to await the future "king of Asia." According to the most vivid story, Alexander proclaimed that it did not matter how the knot was undone, and hacked it apart with his sword.

Alexander's army crossed the Cilician Gates and met and defeated the main Persian army under the command of Darius III Codomannus at the Battle of Issus in 333 BC. Proceeding down the Mediterranean coast, he took Tyre and Gaza after famous sieges (see Siege of Tyre). Alexander passed near but probably did not visit Jerusalem.

In 332-331 BC Alexander was welcomed as a liberator in Egypt and was pronounced the son of Zeus by Egyptian priests of the god Ammon at the Oracle of the god at the Siwah oasis in the Libyan Desert. He founded Alexandria in Egypt, which would become the prosperous capital of the Ptolemaic dynasty after his death. Leaving Egypt, Alexander marched eastward into Assyria (now Iraq) and defeated Darius and a third Persian army at the Battle of Gaugamela. Darius was forced to flee the field after his charioteer was killed, and Alexander chased him as far as Arbela. While Darius fled over the mountains to Ecbatana (modern Hamadan), Alexander marched to Babylon.

From Babylon, Alexander went to Susa, one of the Achaemenid capitals, and captured its treasury. Sending the bulk of his army to Persepolis, the Persian capital, by the Royal Road, Alexander stormed and captured the Persian Gates (in the modern Zagros Mountains), then sprinted for Persepolis before its treasury could be looted. Alexander allowed the League forces to loot Persepolis, and he set fire to the royal palace of Xerxes, allegedly in revenge for the burning of the Athenian Acropolis during the Second Persian War. He then set off in pursuit of Darius, who was kidnapped, and then murdered by followers of Bessus, his Bactrian satrap and kinsman. Bessus then declared himself Darius' successor as Artaxerxes V and retreated into Central Asia to launch a guerrilla campaign against Alexander. With the death of Darius, Alexander declared the war of vengeance at an end, and released his Greek and other allies from service in the League campaign (although he allowed those that wished to re-enlist as mercenaries in his imperial army). His three-year campaign against Bessus and his successor Spitamenes took him through Media, Parthia, Aria, Drangiana, Arachosia, Bactria and Scythia. In the process he captured and refounded Herat and Samarkand, and he founded a series of new cities, all called Alexandria, including one near modern Kandahar in Afghanistan, and Alexandria Eschate ("The Furthest") bordering today's Chinese Turkestan.

During this time, Alexander adopted some elements of Persian dress and customs at his court, notably the custom of proskynesis, a symbolic kissing of the hand that Persians paid to their social superiors, but a practice of which the Greeks disapproved; the Greeks regarded the gesture as the preserve of deities, and believed that Alexander meant to deify himself by requiring it. This cost him much in the sympathies of many of his Greek countrymen. Here, too, a plot against his life was revealed, and his Companion and friend Philotas was executed for treason for failing to bring the plot to his attention. Although Philotas was convicted by the assembled Macedonian army, most historians consider this one of the king's greatest crimes, along with his order to assassinate his senior general Parmenion, Philotas' father. In a drunken quarrel at Macaranda Samarkand, he also murdered the man who had saved his life at the Granicus, Clitus the Black. Later in the Central Asian campaign, a second plot against his life, this one by his own Pages, was revealed, and his official historian, Callisthenes of Olynthus (who had fallen out of favor with the king by leading the opposition to his attempt to introduce proskynesis), was implicated on what most historians regard as trumped-up charges.

With the death of Spitamenes and his marriage to Roxana (Roshanak in Bactrian) to cement his relations with his new Central Asian satrapies, in 326 BC Alexander was finally free to turn his attention to India. King Omphis, ruler of Taxila, surrendered the city to Alexander. Many people had fled to a high fortress/rock called Aornos. Alexander took Aornos by storm (see siege of Aornos). Alexander fought an epic battle against the Indian monarch Porus in the Battle of Hydaspes (326). After victory, Alexander made an alliance with Porus and appointed him as satrap of his own kingdom. Alexander continued on to conquer all the headwaters of the Indus River.

East of Porus' kingdom, near the Ganges River, was the powerful kingdom of Magadha. Exhausted and frightened by the prospect of facing another giant Indian army at the Ganges River, his army mutinied at the Hyphasis (modern Beas), refusing to march further East. Alexander, after the meeting with his officer, Coenus, was convinced that it was better to return. Alexander was forced to turn south, conquering his way down the Indus to the Ocean. He sent much of his army to Carmania (modern southern Iran) with his general Craterus, and commissioned a fleet to explore the Persian Gulf shore under his admiral Nearchus, while he led the rest of his forces back to Persia by the southern route through the Gedrosia (modern Makran in southern Pakistan). 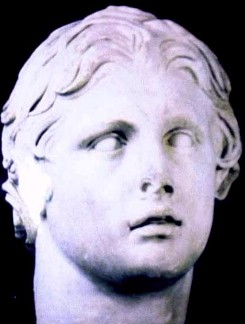 Discovering that many of his satraps and military governors had misbehaved in his absence, Alexander executed a number of them as examples on his way to Susa. As a gesture of thanks, he paid off the debts of his soldiers, and announced that he would send those who were over-aged and the disabled veterans back to Macedonia under Craterus, but his troops misunderstood his intention and mutinied at the town of Opis, refusing to be sent away and bitterly criticizing his adoption of Persian customs and dress and the introduction of Persian officers and soldiers into Macedonian units. Alexander executed the ringleaders of the mutiny, but forgave the rank and file. In an attempt to craft a lasting harmony between his Macedonian and Persian subjects, he held a mass marriage of his senior officers to Persian and other noblewomen at Opis, but few of those marriages seem to have lasted much beyond a year.

His attempts to merge Persian culture with his Greek soldiers also included training a regiment of Persian boys in the ways of Macedonians. It is not certain that Alexander adopted the Persian royal title of shahanshah ("great king" or "king of kings"), but most historians think that he did.

After traveling to Ecbatana to retrieve the bulk of the Persian treasure, his closest friend and probable lover Hephaestion died of an illness. Alexander was distraught. He conducted a campaign of extermination against the Cossaens to assuage his grief. On his return to Babylon, he fell ill and died.

While invading the ancient city of Mali along shore of India he recieved a wound from an arrow in his chest causing him near death. Many historians argue if this was the cause of his death.

This article is licensed under the GNU Free Documentation License. It uses material from the Wikipedia article "Alexander the Great".