The Tigris (Old Persian: Tigr, Syriac Aramaic: Deqlath, Turkish: Dicle; biblical Hiddekel) is the eastern member of the pair of great rivers that define Mesopotamia, along with the Euphrates, which flows from the mountains of Anatolia through Iraq. (Indeed, the name "Mesopotamia" is a Greek translation from the Old Persian Miyanrudan which means "the Land between the Rivers". Bethnahrin is the Aramaic word for the area.). The name Tigris comes from Old Persian and means "the fast one". Another name for this water used from the time of Persian Empire is Arvand which has the same meaning. The name Arvand is today the name of the lower part of Tigris (i.e. Arvand/Shatt al-Arab) in Persian.

The Tigris is approximately 1,800 km (1,150 miles) long, rising in the Taurus Mountains of eastern Turkey and flowing in a generally southeasterly direction until it joins the Euphrates near Al Qurna in southern Iraq. The two rivers together form the Shatt al-Arab waterway, which empties into the Persian Gulf. The river is joined by many tributaries, including the Diyala and Zab.

Baghdad, the capital of Iraq, is on the western bank of the Tigris, while the port-city of Basra straddles both the Tigris and Euphrates. In ancient times, many of the great cities of Mesopotamia stood on or near the river, drawing water from it to irrigate the civilization of the Sumerians. Notable Tigris-side cities included Nineveh, Ctesiphon and Seleucia, while the city of Lagash was irrigated by Tigris water delivered to it via a canal dug around 2400 BC. Saddam Hussein's home town of Tikrit is also located on the river and derives its name from it.

The Tigris has long been an important transport route in a largely desert country. It is navigable as far as Baghdad by shallow-draft vessels but rafts are required for transport upstream to Mosul. River trade declined in importance during the 20th century as the Basra-Baghdad-Mosul railway and roads took over much of the freight traffic.

The river is heavily dammed in both Iraq and Turkey, in order to provide water for irrigating the arid and semi-desert regions bordering the river valley. Damming has also been important for averting floods in Iraq, to which the Tigris has historically been notoriously prone following snowmelt in the Turkish mountains around April. Recent Turkish damming of the river has been the subject of some controversy, both for its environmental effects within Turkey and its potential to reduce the flow of water downstream.

The Euphrates (the traditional Greek name for the river, which is in Old Persian Ufrat, Aramaic Prâth/Frot, in Arabic Al-Furat, in Turkish Fırat and in ancient Assyrian language Pu-rat-tu) is the westernmost of the two great rivers that define Mesopotamia (Bethnahrin in Aramaic), the other being the Tigris. Its name originates from Old Persian and Avestan (Old-Iranian) huperethuua "good to cross over," from hu- "good" + peretu- "ford."

The river is approximately 2,780 km (1,700 miles) long. It is formed by the union of two branches, the Kara (the western Euphrates), which rises in the highlands of eastern Turkey north of Erzerum and the Murat (the eastern Euphrates), which issues from Lake Van. The upper reaches of the Euphrates flow through steep canyons and gorges then southeast across Syria and then through Iraq. The Khabur and the Balikh River join the Euphrates in eastern Syria. They both have their origins in Turkey. Downstream, through its whole length, the Euphrates receives no further water flow. North of Basra, in southern Iraq, the river merges with the Tigris to form the Shatt al-Arab, which in turn empties into the Persian Gulf.

The river used to divide into many channels at Basra, forming an extensive marshland, but the marshes were largely drained by the Saddam Hussein government in the 1990s as a means of driving out the rebellious Marsh Arabs. Since the 2003 invasion of Iraq, the drainage policy has been reversed, but it remains to be seen whether the marshes will recover.

The Euphrates is only navigable by very shallow-draft boats, which can reach as far as the Iraqi city of Hit, located 1,200 miles upstream and which is only 53 meters above sea level. Above Hit, however, shoals and rapids make the river commercially unnavigable. Its annual inundation, caused by snowmelt in the mountains of Armenia, has been partly checked by new dams and reservoirs in the upper reaches. A 550-mile canal links the Euphrates to the Tigris to serve as a route for river barges. 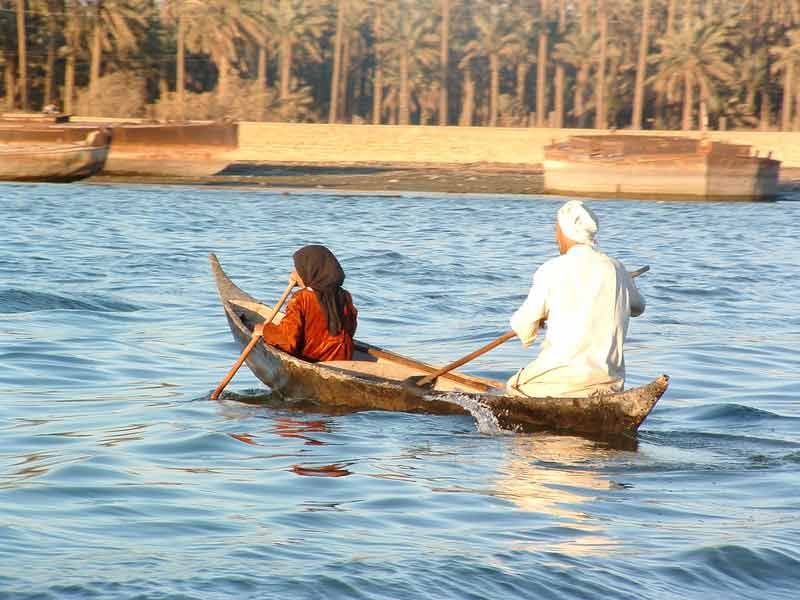 A man and woman make their way up the Shatt-al-Arab in Basra, Iraq.

The river Euphrates is one of the four rivers that flow from the Garden of Eden according to Book of Genesis 2:14. It is the fourth river, after Pishon, Gihon, and Tigris, to form from the river flowing out of the garden. The river also marked one of the boundaries of the land promised by God to Abraham and his descendants. In the Hebrew Bible it is often referred to simply as "The River" (ha-nahar).

In the Book of Revelation, it is prophesied that in the "end times" the river will dry up in preparation for the Battle of Armageddon.

In Islam, some of the hadiths of Muhammad suggest that the Euphrates will dry up, revealing unknown treasures that will be the cause of strife and war.

The Euphrates provided the water that led to the first flowering of civilisation in Sumeria, dating from about the 4th millennium BC. Many important ancient cities were located on or near the riverside, including Mari, Sippar, Nippur, Shurrupak, Uruk, Ur and Eridu. The river valley formed the heartlands of the later empires of Babylonia and Assyria. For several centuries the river formed the eastern limit of effective Egyptian and Roman control and western regions of the Persian Empire.

As with the Tigris there is much controversy over rights and use of the river. The Southeast Anatolia Development Project in Turkey involves the construction of 22 dams and 19 power plants by 2005, the biggest development project ever undertaken by Turkey. The first of the dams was completed in 1990. Southeast Turkey is still struggling economically, adding fuel to the discontent expressed by Turkey's Kurdish minority centered there. The Turkish authorities hope that the project will provide a boost to the region's economy, but domestic and foreign critics have disputed its benefits as well as attacking the social and environmental costs of the scheme.

In Syria the Tabqa Dam (completed in 1973 and sometimes known simply as the Euphrates Dam) forms a reservoir, Lake Assad, that is used for irrigating cotton. Syria has dammed its two tributaries and is constructing another dam. Iraq has seven dams in operation, but water control lost priority during Saddam Hussein's regime. Since the collapse of Ba'ath Iraq in 2003, water use has come once again to the fore. The scarcity of water in the Middle East leaves Iraq in constant fear that Syria and Turkey will use up most of the water before it reaches Iraq. As it is, irrigation in southern Iraq leaves little water to join the Tigris at the Shatt-al-Arab.

This article is licensed under the GNU Free Documentation License. It uses material from the Wikipedia article "The Tigris".