The Cheetah (Acinonyx jubatus) is an atypical member of the cat family (Felidae) that hunts by speed rather than by stealth or pack tactics. It is the fastest of all terrestrial animals and can reach speeds of up to 110 km/h (70 mph) in short bursts.

The cheetah's body is svelte and muscular, though it seems slender and almost fragile in build. Its chest is deep and its waist narrow. It has a small head and short muzzle, high-placed eyes, large nostrils, and small round ears. The fur of the cheetah is yellow with round black spots and black tear lines on the sides of the muzzle. The adult animal weighs from 40 to 65 kg (90 to 140 lb). Its total body length is from 112 to 135 cm (45 in to 55 in), while the tail can measure up to 84 cm (33 in). 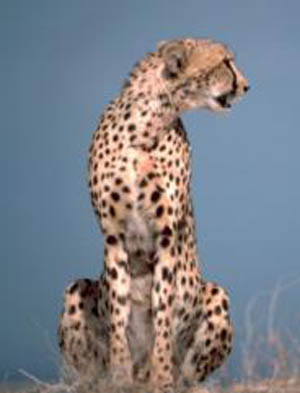 The genus name, Acinonyx, means "no-move-claw" in Greek, while the species name, jubatus, means "maned" in Latin, a reference to the mane found in cheetah cubs. It is the only cat that cannot completely retract its claws. Even when retracted, the claws remain visible and are used for grip during the cheetah's acceleration and maneuvering.

Females give birth to three to five cubs after a gestation of ninety to ninety-five days. The cubs weigh from 150 to 300 g (5 to 10 oz.) at birth. They leave their mother between thirteen and twenty months after birth. The cheetah can live over twenty years. Unlike other felines, the adult females do not have true territories and seem to avoid each other. Males sometimes form small groups, especially when they came from the same litter.

Cheetahs are carnivores, eating mostly mammals under 40 kg (90 lb), including gazelles, impala, gnu calves, and hares. Prey is stalked to within ten to thirty meters (30-100 ft), then chased. The chase is usually over in less than a minute and if the cheetah fails to make a quick catch, it will often give up rather than waste energy. Roughly half of the chases are successful.

Cheetahs are found in the wild only in Africa, but in the past their range extended into northern India and the Iranian plateau, where they were domesticated by aristocrats and used to hunt antelopes in much the same way as is still done with members of the greyhound family.

The cheetah prefers to live in an open biotope, such as semi-desert, prairie, and thick brush.

Cheetahs have unusually low genetic variability and high abnormal sperm count. It is thought that they went through a prolonged period of inbreeding following a genetic bottleneck during the last ice age. They probably evolved in Africa during the Miocene epoch (26 million to 7.5 million years ago), before migrating to Asia. Now extinct species include: Acinonyx pardinensis (Pliocene epoch), much larger than modern cheetahs and found in Europe, India, and China; Acinonyx intermedius (mid-Pleistocene period), found over the same range; and Miracinonyx inexpectatus, Miracinonyx studeri, and Miracinonyx trumani (early to late Pleistocene epoch), found in North America. 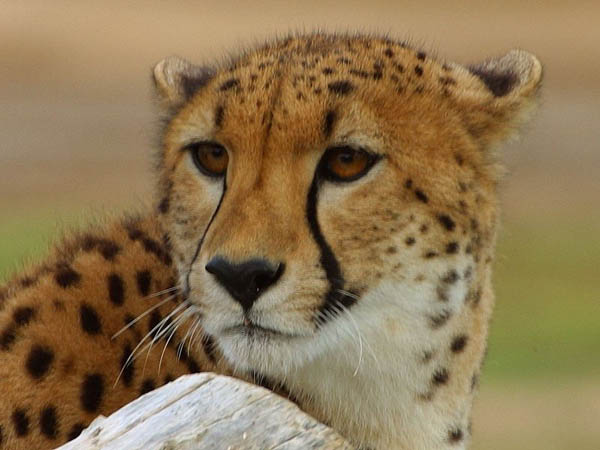 Cheetah fur was formerly regarded as a status symbol. Today, cheetahs have a growing economic importance for ecotourism and they are also found in zoos. Because cheetahs are far less aggressive than other big cats, cubs are sometimes sold as pets. This is an illegal trade, because international conventions forbid private ownership of wild animals or species threatened with extinction. Cheetahs were formerly hunted because many farmers believed that they ate livestock. When the species came under threat, numerous campaigns were launched to try to educate farmers and encourage them to conserve cheetahs. Ancient Egyptians often kept them as pets.

Cheetah cubs have a high mortality rate due to genetic factors and predation by carnivores in competition with the cheetah, such as the lion and hyena. Some biologists now believe that they are too inbred to flourish as a species.

Cheetahs are included on the IUCN list: vulnerable species (African subspecies threatened, Asiatic subspecies in critical situation) as well as on the US ESA: threatened species - Appendix I of CITES (Convention on International Trade in Endangered Species). Approximately 12,400 cheetahs remain in the wild in 25 African countries; Namibia has the most, with about 2,500. Another 100-200 are thought to remain in Iran. There have been successful breeding programs, including the use of in-vitro fertilization, in zoos around the world.

This article is licensed under the GNU Free Documentation License. It uses material from the Wikipedia article "Cheetah".