A camel is either of the two species of large even-toed ungulate in the genus Camelus, the Dromedary (Single hump) and the Bactrian Camel (Double hump). Both are native to the dry and desert areas of Asia and northern Africa. The name camel comes via the Greek kamelos from the Hebrew gamal, "camel".

The term camel is also used more broadly, to describe any of the six camel-like creatures in the family Camelidae: the two true camels, and the four South American camelids: Llama, Alpaca, Guanaco and Vicuna. For an overview of the camel family, see camelid. For more information on the two true camels, see Dromedary and Bactrian Camel. 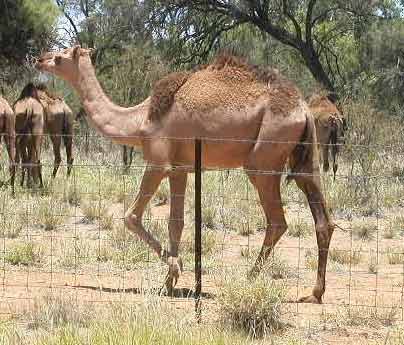 Camels are well known for their humps. They do not store water in them as is commonly

believed. Their humps are a reservoir of fatty tissue, while water is stored in their blood. This allows them to survive days on end without food and water.

Although there are almost 13 million Dromedaries alive today, the species is extinct in the wild: all but a handful are domesticated animals (mostly in Sudan, Somalia, India and nearby countries). There is, however, a substantial feral population estimated at 700,000 in central Australia, descended from individuals that escaped from captivity in the late 19th century. This population is growing at approximately 11% per year and in recent times the Southern Australian state government has decided to cull the animals using aerial marksmen, the reason being that the camels use too much of the limited resources needed by sheep farmers. 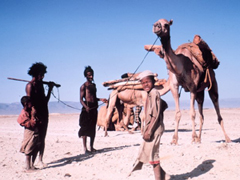 The Bactrian Camel once had an enormous range, but is now reduced to an estimated 1.4 million animals, mostly domesticated. It is thought that there are about 1000 wild Bactrian Camels in the Gobi Desert, and small numbers in Iran, Afghanistan, Turkey and Russia.

A small population of introduced camels, Dromedaries and Bactrians, survived in the Southwest United States until the early 1900s. These animals, imported from Turkey, were part of the US Camel Corps experiment and used as draft animals in mines, and escaped or were released after the project fell through.

This article is licensed under the GNU Free Documentation License. It uses material from the Wikipedia article "Camels".