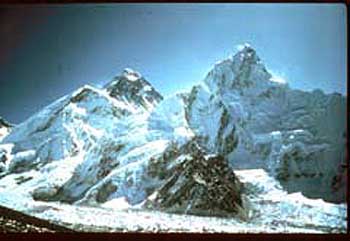 Everest is the highest mountain on Earth (as measured from sea level). The summit ridge of the mountain marks the border between Nepal and Tibet, with the actual summit located in Tibet.

Radhanath Sikdar, an Indian mathematician and surveyor from Bengal, was the first to identify Everest as the world's tallest peak in 1852 through trigonometric calculations based on measurements made with theodolites from 240 km (150 miles) away in India. Prior to its survey and naming it was known as Peak XV to the survey team.

The mountain is approximately 8,850 m (29,035 feet) high, although there is some variation in the measurements. Neither the government of Nepal nor the PRC have officially recognised this measurement, and still consider the official height of Everest to be 8,848 m.

In the 1950s an Indian survey made closer to the mountain also using theodolites gave another often quoted figure of 8,848 m (29,028 feet). Today's generally accepted value of 8,850 m (29,035 feet) was obtained via GPS readings from a device placed on the summit by the USA in 1999. Everest is still growing due to the plate tectonics of the area, adding 3 to 5 mm to the height and moving north-eastward at 27 mm per year.

On June 8, 1924, George Mallory and Andrew Irvine, both of the United Kingdom, made an attempt on the summit from which they never returned. Noel Odell, the expedition's geologist, saw the pair climbing up "with great alacrity... near the base of the final pyramide" [sic] at 12:50pm that day. In 1979 climber Wang Hongbao of China revealed to a companion that he had discovered a body in 1975 thought to be Irvine, but he unfortunately was killed in a fall the very next day before he could provide precise details to anyone else. In 1999 however, the famous Mallory and Irvine Research Expedition found instead Mallory's body in the predicted search area near the old Chinese camp. Controversy has raged in the mountaineering community as to whether the duo may have made it to the top of the world, 29 years before the confirmed ascent (and of course, safe descent) of Everest by Sir Edmund Hillary and Tenzing Norgay in 1953. The general consensus among climbers has been that they did not. There's no evidence of either man above the Second Step but if Mallory had made it that far then he likely summitted, for there are no difficult technical climbs further up. Almost everyone agrees Mallory died in a short fall during his descent. Irvine probably briefly survived the fall that killed Mallory, but died later of injuries and/or exposure. Irvine's body was probably found by another Chinese climber in 1960 but has not been rediscovered since, despite several searches in 2004. Mallory had gone on a speaking tour of the United States the year before in 1923; it was then that he exasperatedly gave the famous reply, "Because it is there", to a New York journalist in response to hearing the question, "Why climb Everest?" for seemingly the thousandth time.

This article is licensed under the GNU Free Documentation License. It uses material from the Wikipedia article "Mount Everest".