Orangutans (also spelled orang utan, orang-utan, sometimes incorrectly orangutang) are two species of great apes with long arms and reddish, sometimes brown, hair native to Malaysia and Indonesia. The word orangutan is derived from the Malay orang hutan meaning man of the forest. They are the only extant species in the genus Pongo and the subfamily Ponginae, although that subfamily also includes the extinct Gigantopithecus and Sivapithecus genera. 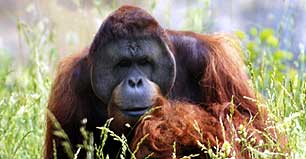 Orangutans are the most arboreal of the great apes, spending nearly all of their time in the trees, making a new nest in the trees every night. They are only found in rainforests on the islands of Borneo and Sumatra. These two small isolated populations were classified as subspecies until recently, when they were elevated to full specific level (Pongo pygmaeus on Borneo, and P. abelii on Sumatra). Furthermore, primatologists now recognise three subspecies of the Bornean orangutan: P. p. pygmaeus in northwest Borneo, P. p. morio in northeast and east Borneo, and P. p. wurmbii in southwest Borneo.

Orangutans are highly endangered in the wild. Orangutan habitat destruction due to logging, mining and forest fires has been increasing rapidly in the last decade. Much of this activity is illegal, occurring in national parks that are officially off limits to loggers, miners and plantation development. There is also a major problem with the illegal trapping of baby orangutans for sale into the pet trade; the trappers usually kill the mother to steal the baby. 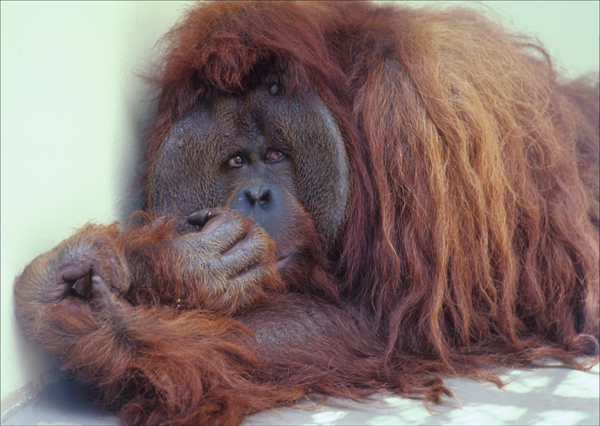 Like the other great apes, orangutans are remarkably intelligent. In the mid-1990s, one population of orangutans was found to use feeding tools regularly. Evidence of this had been earlier discovered among chimpanzees by Jane Goodall in the 1960s. A 2003 paper in the journal Science described the evidence for distinct orangutan cultures (see external link 1 below for more details). Although orangutans are generally passive, aggression towards other orangutans is very common; they are solitary animals and can be fiercely territorial. Immature males will try to mate with any female, and may succeed in forcibly copulating with her (rape) if she is also immature and not strong enough to fend him off. Mature females easily fend off their immature suitors, preferring to mate with a mature male. Wild orangutans are known to visit human-run facilities for orphaned young orangutans released from illegal captivity, interacting with the orphans and probably helping them adapt in their return to living in the wild.

Major conservation centres in Borneo include those at Semenggok in Sarawak, and Sepilok near Sandakan in Sabah.

This article is licensed under the GNU Free Documentation License. It uses material from the Wikipedia article "Orangutan".