African art is any form of art or material culture that originates from the continent of Africa. The arts and material culture of the African continent constitute one of the most diverse and innovative artistic legacies on the planet. Though many casual observers tend to generalize "traditional" African art, the continent is actually full of a multitude of peoples, societies, and civilizations, each with a unique visual culture. Despite this incredible diversity, there do seem to be some unifying artistic themes when considering the totality of visual culture from the continent of Africa.

Formal Innovation - Unlike "Western" societies, where artworks tend to be produced according to strict canons of representation, many African societies encourage innovation and creativity of both style and form among their artists. This innovation and diversity can be seen not only across long expanses of time and geography, but also even from village to village.

Visual Abstraction - African artworks tend to favor visual abstraction over naturalistic representation. This is because many African artworks, regardless of medium, tend to represent objects or ideas rather than depict them (there are of course exceptions to this, most notably the portrait heads of the Yoruba city of Ile-Ife, as well as ancient Egyptian artworks.)

Emphasis on Sculpture - African artists tend to favor three-dimensional artworks over two-dimensional works. Even many African paintings or cloth works were meant to be experienced three-dimensionally. House paintings are often seen as a continuous design wrapped around a house, forcing the viewer to walk around the work to experience it fully; while decorated cloths are worn as decorative or ceremonial garments, transforming the wearer into a living sculpture.

Emphasis on Performance Art - African art tends to be used in performance contexts more than static ones. Take the well-known example of African masks. Most societies in Africa have names for their masks, but this single name incorporates not only the sculpture, but also the meanings of the mask, the dance associated with it, and the spirits that reside within. In African thought, the three cannot be differentiated, and it is important to consider this when studying African art of any form.

Multiplicity of Meaning - Lastly, and related to the previous point, African art tends to carry a multiplicity of meaning, a fact that can be very confusing to many Western observers. Those searching for a specific description of the meaning of a piece of African art will soon be endlessly confused by the multitude of uses, meanings, and social contexts that can be contained in a single artwork.

The term "African art" has a long and surprisingly controversial history. Up until recently, the designation "African" was usually only bestowed on the arts of "Black Africa," i.e. the cultures and peoples living in sub-Saharan Africa. The people of North Africa, Mediterranean Africans, Ethiopians, as well as the art of Ancient Egypt, was not declared "African art." Recently, there has been a movement among African art historians and other scholars to include the visual culture of these areas under the term "African art," since all the cultures that produced them do in fact occur within the geographic boundaries of the continent of Africa. The notion is that by including all African cultures and their visual culture in "African art," lay persons will gain a greater understanding of the diversity of cultures that exist and have existed on the continent, both north and south of the Sahara. Since there was often a confluence of traditional African, Islamic and Mediterranean cultures, scholars have found that drawing distinct divisions among Islam, ancient Egypt, the Mediterranean, and traditional African societies makes little sense. Finally, the arts of the people of the African diaspora, prevalent in Brazil, the Caribbean, and the southeastern United States, have also begun to be included in the study of "African art" as products of displaced African peoples and their encounters with a new world and new cultures.

Two of the Benin Bronzes 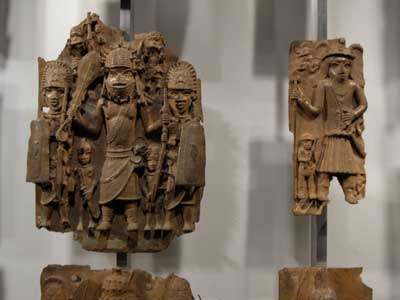 The origins of African art lie long before recorded history. African rock art in the Sahara Desert in Niger preserves 6000-year-old carvings. The earliest known sculptures are from the Nok culture of Nigeria, made around 500 BCE. Along with Sub-Saharan Africa, the cultural arts of the western tribes, ancient Egyptian artifacts, and indigenous southern crafts also contributed greatly to African art. Often depicting the abundance of surrounding nature, the art was often abstract interpretations of animals, plant life, or natural designs and shapes.

More complex methods of producing art were first introduced to Sub-Saharan Africa around the 13th century, along with the spread of Islam. Bronze and brass castings, often ornamented with ivory and precious stones, became highly prestigious in much of West Africa, sometimes being limited to the work of court artists and identified with royalty, as with the Benin Bronzes.

At the start of the twentieth century, artists like Picasso, Matisse and Modigliani were profoundly inspired by abstract African sculptures in their search for new forms of expression. For the West, the cubist movement was the first time 'traditional' African masks and sculptures were analyzed as works of art rather than ethnographic pieces. Picasso's African influenced period lasted between 1907 and 1909 where he based many works on African art and sculpture.

'Traditional' art describes the most popular and studied forms of African art which are typically found in museum collections. Wooden masks, which might either be human or animal, are one of the most commonly found forms of art in western Africa. In their original contexts, ceremonial masks are used by actors and dancers in religious, political or social performances. Ivory, stone, and semi-precious gems were also included in the masks, along with materials to make statues. Decorative clothing was also commonplace, and comprise another large part of African art, using complicated techniques.

A carving by the Makonde tribe of East Africa, c. 1974 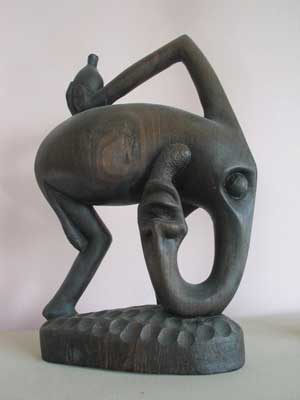 This article is licensed under the GNU Free Documentation License. It uses material from the Wikipedia article "Economy of Africa ".