The Black Sea (known as the Euxine Sea, in antiquity; Latin: Pontus Euxinus) is an inland sea between southeastern Europe and Asia Minor. It is connected to the Mediterranean Sea by the Bosporus and the Sea of Marmara, and to the Sea of Azov by the Strait of Kerch. There is a net inflow of seawater through the Bosporus, 200 km³ per year. There is an inflow of freshwater from the surrounding areas, especially central and middle-eastern Europe, totalling 320 km³ per year. The most important river entering the Black Sea is the Danube. The Black Sea has an area of 422,000 km² and a maximum depth of 2210 m. 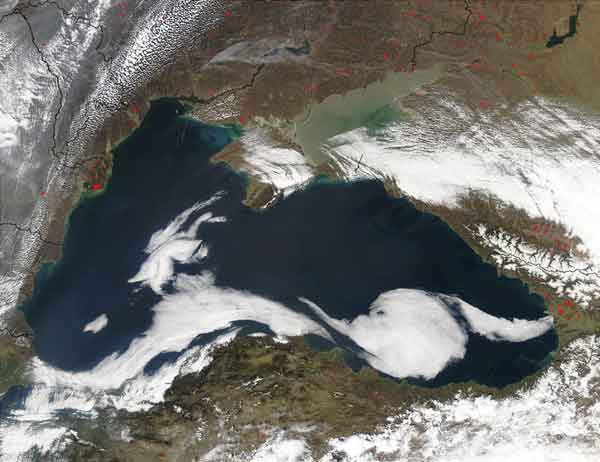 An equivalent of the name "Black Sea" cannot be traced to an earlier date than the 13th century. Strabo reports that in antiquity, the Black Sea was often just called "the Sea" (pontos), just like Homer was often simply called "the Poet". For the most part, Graeco-Roman tradition refers to the Black Sea as Euxeinos Pontos "Hospitable sea". Strabo thinks that the Black Sea was called "inhospitable" before Greek colonization, because it was difficult to navigate, and because its shores were inhabited by savage tribes, and that the name was changed to "hospitable" after the Milesians had colonized, as it were making it part of the Greek civilization. It is, however, likely, that the name Axeinos arose by popular etymology, either from an Iranian axaina "dark", or from Ascanian, i.e. Phrygian. If from axaina "dark", the designation "Black Sea" would, after all, go back to Antiquity. The motive for the name may be an ancient assignment of colors to the direction of the compass, "black" referring to the north, and "red" referring to the south. Herodotus on one occasion uses Red Sea and "Southern Sea" interchangeably.

The Black Sea is the largest anoxic, or oxygen-free, marine system. This is a result of the great depth of the sea and the relatively high salinity (and therefore density) of the water at depth; freshwater and seawater mixing is limited to the uppermost 100 to 150 m, with the water below this interface (called the pycnocline) being exchanged only once every thousand years. There is therefore no significant gas exchange with the surface, and as a result decaying organic matter in the sediment consumes any available oxygen. In these anoxic conditions some extremophile microorganisms are able to use sulfate (SO42−) for oxidation of organic material, producing hydrogen sulfide (H2S) and carbon dioxide. This mix is extremely toxic (a lungful would be fatal to a human), resulting in a sea that has almost all of its ecology living in that top layer down to a depth of approximately 180 m (600 ft). The relative lack of micro-organisms and oxygen has allowed deep-sea expeditions to recover ancient (on the order of thousands of years) human artifacts, such as boat hulls and the remains of settlements. Large amounts of organic material reach the bottom of the sea and accumulate in the sediments in concentrations of up to 20%. These kinds of sediments are called sapropel.

While it is agreed that the Black Sea has been a freshwater lake (at least in upper layers) with a considerably lower level during the last glaciation, its postglacial development into a marine sea is still a subject of intensive study and debate. There are catastrophic scenarios such as put forward by William Ryan and Walter Pitman as well as models emphasizing a more gradual transition to saline conditions and transgression in the Black Sea. They are based on different theories about the level the freshwater lake had reached by the time the Mediterranean Sea was high enough to flow over the Dardanelles and the Bosporus. On the other hand, a study of the sea floor on the Aegean side shows that in the 8th millennium BCE there was a large flow of fresh water out of the Black Sea.

The steppes to the north of the Black Sea have been suggested as the original homeland (Urheimat) of the speakers of the Proto-Indo-European language, (PIE) the progenitor of the Indo-European language family, by some scholars (others move the heartland further east towards the Caspian Sea, yet others to Anatolia).


This article is licensed under the GNU Free Documentation License. It uses material from the Wikipedia article "Black Sea".