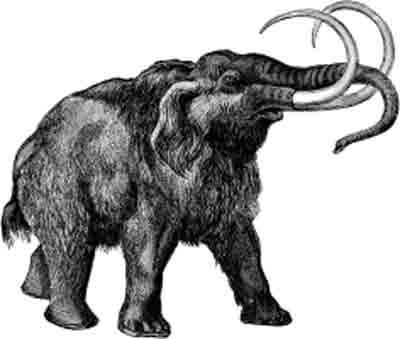 In due course the African mammoth migrated north to Europe and gave rise to a new species, the southern mammoth (Mammuthus meridionalis). This eventually spread across Europe and Asia and crossed the now-submerged Bering Land Bridge into North America. Around 700,000 years ago, the warm climate of the time deteriorated markedly and the savannah plains of Europe, Asia and North America gave way to colder and less fertile steppes. The southern mammoth consequently declined, being replaced across most of its territory by the cold-adapted steppe mammoth (Mammuthus trogontherii). This in turn gave rise to the woolly mammoth, Mammuthus primogenius) around 300,000 years ago. Woolly mammoth was better able to cope with the extreme cold of the Ice Ages.

It is a common misconception that mammoths were much larger than modern elephants, an error that has led to "mammoth" being used as an adjective meaning "very big". Certainly, the largest known species, the Imperial Mammoth of California, reached heights of at least 4 meters (13 feet) at the shoulder. Mammoths would probably weigh in the region of 6-8 tons. However, most species of mammoth were only about as large as a modern Indian elephant, and fossils of a species of dwarf mammoth have been found on Wrangel Island off the east coast of Siberia.

Mammoths had a number of adaptations to the cold, most famously the thick layer of shaggy hair, up to 50 cm (20 in) long, for which the woolly mammoth is named. They also had far smaller ears than modern elephants; the largest mammoth ear found so far was only a foot (30 cm) long, compared to six feet (1.8 m) for an African elephant. They had a flap of hairy skin which covered the anus, keeping out the cold. Their teeth were also adapted to their diet of coarse tundra grasses, with more plates and a higher crown than their southern relatives. Their skin was no thicker than that of present-day elephants, but unlike elephants they had numerous sebaceous glands in their skin which secreted greasy fat into their hair, improving its insulating qualities. They had a layer of fat up to 8 cm (3 in) thick under the skin which, like the blubber of whales, helped to keep them warm.

Mammoths had extremely long tusks - up to 16 feet (5 m) long - which were markedly curved, to a much greater extent than those of elephants. It is not clear whether the tusks were a specific adaptation to their environment, but it has been suggested that mammoths may have used their tusks as shovels to clear snow from the ground and reach the vegetation buried below. 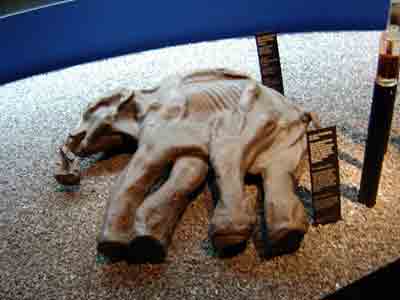 Preserved frozen remains of woolly mammoths have been found in the northern parts of Siberia. However, the popular notion that these bodies were 'flash frozen' and perfectly preserved is a myth propagated by authors such as Immanuel Velikovsky. Preservation is a rare occurrence, essentially requiring the animal to have been buried rapidly in liquid or semi-solids such as silt, mud and icy water which then froze.

To date, thirty-nine preserved bodies have been found, but only four of them are complete. In most cases the flesh shows signs of decay before its freezing and later desiccation. Stories abound about frozen mammoth corpses that were still edible once defrosted, but the original sources indicate that the corpses were in fact terribly decayed, and the stench so unbearable that only the dogs accompanying the finders showed any interest in the flesh.

In addition to frozen corpses, large amounts of mammoth ivory have been found in Siberia. Mammoth tusks have been an article of trade for at least 2,000 years. They have been and are still a highly prized commodity. Güyük, the 13th century Khan of the Mongols, is reputed to have sat on a throne made from mammoth ivory, and even today it is in great demand as a replacement for the now-banned export of elephant ivory.

This article is licensed under the GNU Free Documentation License. It uses material from the Wikipedia article "Mammoths".