The aurochs (Bos primigenius) is an extinct European mammal of the Bovidae family. The word aurochs is both singular and plural; alternative plural forms are aurochsen or urus. The animal's original scientific name, Bos primigenius, translated the German term Auerochse or Urochs, literally "primeval ox", or "proto-ox". This scientific name is now considered invalid by ITIS, who classify aurochs under Bos taurus, the same species as domestic cattle. 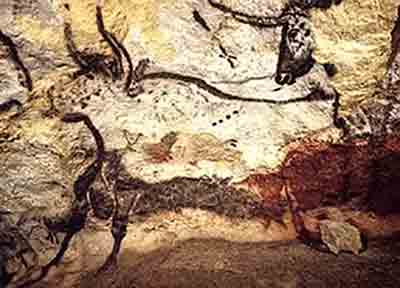 Aurochs evolved in India some two million years ago, migrated into the Middle East and further into Asia, and reached Europe about 250,000 years ago. They were once considered a distinct species from modern European cattle (Bos taurus), but more recent taxonomy has rejected this distinction. The South Asian domestic cattle, or zebu, descended from a different group of aurochs at the edge of the Thar Desert in India; this would explain zebu resistance to drought. Domestic yak, gayal and Javan cattle do not descend from aurochs. Modern cattle have become much smaller than their wild forebears: the height at the withers of a domesticated cow is about 1.4 meters, whereas an aurochs could reach about 1.75 meters.

Aurochs are depicted in many Paleolithic European cave paintings such as those found at Lascaux and Livernon in France. Their life force may have been attributed with magical qualities, for early carvings of the aurochs have also been found. The impressive and dangerous aurochs survived into the Iron Age in Anatolia and the Near East, and was worshiped throughout that area as a sacred animal, the Lunar Bull, associated with the Great Goddess and later with Mithras.

Domestication of the aurochs began in the southern Caucasus and northern Mesopotamia from about the 6th millennium BC, while genetic evidence suggests that aurochs were independently domesticated in northern Africa and in India. Domestication caused dramatic changes to the physiology of the creatures, to the extent that domestic cattle must now be regarded as a separate species. 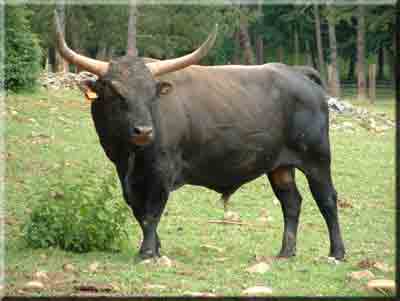 Modern breed of Aurochs, "rebred" to the original

Genetic analysis has provided many insights about the aurochs. Though aurochs became extinct in Britain during the Bronze age, analysis of bones from aurochs that lived contemporaneously with domesticated cattle there showed no genetic contribution to modern breeds. So modern European cattle are thought to be descended directly from the Near East domestication event. Indian cattle (zebu), although domesticated eight to ten thousand years ago, are related to aurochs which diverged from the Near Eastern ones some 200,000 years ago. The African cattle are thought to descend from aurochs more closely related to the Near Eastern ones. The Near East and African aurochs groups are thought to have split some 25,000 years ago, probably 15,000 years before domestication. The "Turano-Mongolian" type of cattle now found in Northern China, Mongolia, Korea and Japan may represent a fourth domestication event (and a third event among Bos taurus–type aurochs). This group may have diverged from the Near East group some 35,000 years ago. Whether these separate genetic populations would have equated to separate subspecies is unclear.

The original range of the aurochs was from the British Isles, to Africa, the Middle East, India and central Asia. By the 13th century A.D., the aurochs' range was restricted to Poland, Lithuania and East Prussia. The right to hunt large animals on any land was restricted to nobles and gradually to the royal household. As the population of aurochs declined, hunting ceased but the royal court still required gamekeepers to provide open fields for the aurochs to graze in. The gamekeepers were exempted from local taxes in exchange for their service and a decree made poaching an aurochs punishable by death. In 1564, the gamekeepers knew of only 38 animals, according to the royal survey. The last recorded live aurochs (female) died in 1627 in the Jaktorów Forest, Poland.

In the 1920s two German zookeepers, the brothers Heinz and Lutz Heck, attempted to breed the aurochs back into existence (see breeding back) from the domestic cattle that were their descendants. Their plan was based on the conception that a species is not extinct as long as all its genes are still present in a living population. The result is the breed called Heck Cattle, 'Recreated Aurochs', or 'Heck Aurochs', which bears an incomplete resemblance to what is known about the physiology of the wild aurochs.

This article is licensed under the GNU Free Documentation License. It uses material from the Wikipedia article "Aurochs".