In paleoanthropology, the single-origin hypothesis (or Out-of-Africa model) is one of two accounts of the origin of anatomically modern humans, Homo sapiens. (The other theory is the multiregional hypothesis, which includes the Hybrid-origin theory) 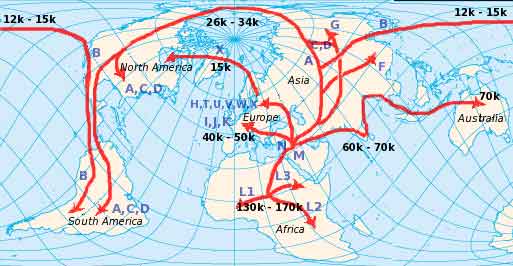 Map of the theoretical migration of huamns around the world. Numbers are in thousands of years in the past.

Because of the scarcity of fossils and the discovery of important new finds every few years, researchers disagree about the details and sometimes even basic elements of human evolutionary history. While they have revised this history several times over the last decades, researchers currently agree that the oldest named species of the genus Homo, Homo habilis, evolved in Africa around two million years ago, and that members of the genus migrated out of Africa somewhat later. The descendants of these ancient migrants, which probably included Homo erectus, have become known through fossils uncovered far from Africa, such as those of "Peking man" and "Java man". The Homo neanderthalensis is also considered a descendant of early migrants.

According to the single-origin model, however, every species of the genus Homo but one, Homo sapiens, was driven extinct. This species had evolved in eastern Africa between 100,000 and 200,000 years ago and, some time afterwards, in a relatively recent exodus, began colonizing the rest of the world. According to the single-origin model, these more recent migrants did not interbreed with the scattered descendants of earlier exoduses. For this reason, the model is sometimes called the "replacement scenario". In support of it, advocates have drawn from both fossil and DNA evidence, in particular from mitochondrial and Y-chromosome DNA sequences. Research on the X chromosome claims to be the first genetic evidence against this model, suggesting an alternative model incorporating admixture between divergent African branches of the genus Homo.

The opponents of a single origin argue that interbreeding indeed occurred, and that the characteristics of modern humans, including those that have been and still are perceived by some to distinguish races, could only be the result of genetic contributions from several earlier lineages that evolved semi-independently in different parts of the world. This is the "multiregional hypothesis", including the hybrid-origin theory.

All text is available under the terms of the GNU Free Documentation License.