The Klondike Gold Rush was a frenzy of gold rush immigration to and gold prospecting in the Klondike near Dawson City in the Yukon Territory, Canada, after gold was discovered in the late 19th century.

In August 1896, three people led by Skookum Jim Mason (a member of the Tagish nation whose birth name was Keish) headed up the Yukon River from the Carcross area looking for his sister Kate and her husband George Carmack. The party included Skookum Jim, Skookum Jim's cousin known as Dawson Charlie (or sometimes Tagish Charlie) and his nephew Patsy Henderson. After meeting up with George and Kate who were fishing for salmon at the mouth of the Klondike River, they ran into Nova Scotian Robert Henderson who had been mining gold on the Indian River, just south of the Klondike. Henderson told George Carmack about where he was mining and that he did not want any "damn Siwashes" (meaning Indians) near him. The group then headed a few miles up the Klondike River to Rabbit Creek, now Bonanza Creek to hunt moose.

On August 16, 1896, the party discovered rich placer gold deposits in Bonanza (Rabbit) Creek. It is now generally accepted that Skookum Jim made the actual discovery, but some accounts say that it was Kate Carmack. George Carmack was officially credited for the discovery because the "discovery" claim was staked in his name. The group agreed to this because they felt that other miners would be reluctant to recognise a claim made by an Indian, given the strong racist attitudes of the time. Further evidence of Skookum Jim's discovery is that he was eagerly followed by other miners and caused a mini rush when he later staked some claims in the Kluane Lake area in 1905. 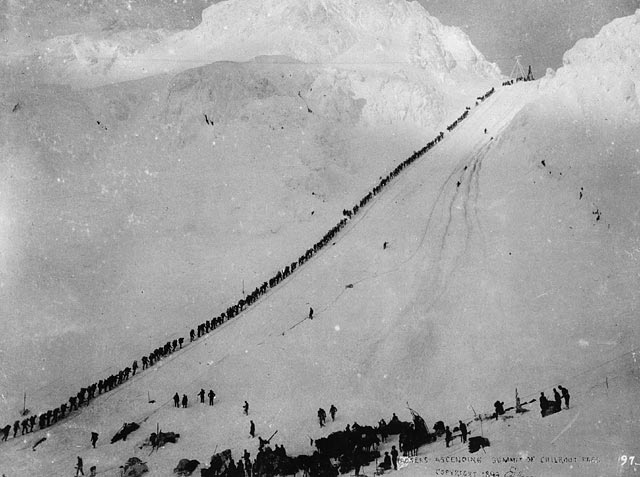 Miners and prospectors climb the Chilkoot Trail during the Klondike Gold Rush. From the Canadian National Archives.

The news spread to other mining camps in the Yukon River valley, and the Bonanza, Eldorado and Hunker Creeks were rapidly staked by miners who had been previously working creeks and sandbars on the Fortymile and Stewart Rivers. In a fate that many believe to be poetic justice, Henderson, who was mining only a few miles away over the hill, only found out about the discovery after the rich creeks had been all staked.

News reached the United States on July 17, 1897 when the first successful prospectors arrived in Seattle, and within a month the Klondike stampede had begun. The population in the Klondike in 1898 may have reached 40,000, threatening to cause a famine.

Most prospectors landed at Skagway at the head of Lynn Canal and crossed by the Chilkoot Trail or White Pass to Bennett Lake. Here, prospectors built boats that would take them the final 500 miles (800 km) down the Yukon River to the gold fields. Stampeders had to carry one ton of goods over the pass to be allowed to enter Canada. At the top of the passes, the stampeders encountered a Mountie post that enforced that regulation. It was put in place to avert shortages like those that had occurred in the previous two winters in Dawson City.

The Chilkoot Pass was steep and hazardous, rising a thousand feet in the last half mile (300 m in 800 m). It was too steep for pack animals and prospectors had to pack their equipment and supplies to the top. Some 1,500 steps were carved into the ice to aid travel up the pass. 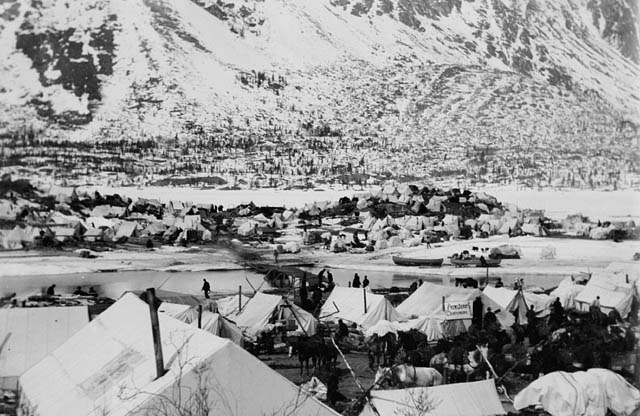 Miner's camp at the head of the Yukon River during the Klondike Gold Rush, from the Canadian National Archives

Even though it was not as high, conditions on White Pass were even worse. It was known as the Dead Horse Trail with about 3,000 animals dying along the route.

Others took the Copper River Trail or the Teslin Trail by Stikine River and Teslin Lake, and some used the all-Canadian Ashcroft and Edmonton trails. The other main route was by steamer about 2600 kilometers (1600 miles) up the Yukon River. Many using this route late in 1897 were caught by winter ice below Fort Yukon, Alaska and had to be rescued.

Throughout this period, the North West Mounted Police, under the command of Sam Steele maintained a firm grip on the activities of the prospectors to ensure the safety of the population as well as enforcing the laws and sovereignty of Canada. As a result, this gold rush has been described as the most peaceful and orderly of its type in history. The effectiveness of the Mounties in this period made the police force famous around the world, and ensured the survival of the organization at a time when its continued operation was being debated in the Canadian Parliament.

The gold rush remains an important event in the history of the city of Edmonton, which to this day celebrates Klondike Days, an annual summer fair with a Klondike gold rush theme.

Among the many to take part in the gold rush was writer Jack London, whose books White Fang and The Call of the Wild were influenced by his northern experiences, and adventurer "Swiftwater" Bill Gates.

This article is licensed under the GNU Free Documentation License. It uses material from the Wikipedia article "Klondike Gold Rush".