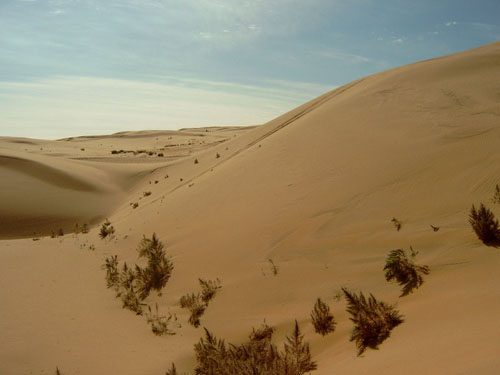 The Gobi is a large desert region in northern China and southern Mongolia. The desert basins of the Gobi are bounded by the Altai mountains and the grasslands and steppes of Mongolia on the north, by the Tibetan Plateau to the southwest, and by the North China Plain to the southwest. The word Gobi means "desert" in Mongolian. The Gobi is made up of several distinct ecological and geographic regions, based on variations in climate and topography.

The Gobi is most notable in history as part of the great Mongol Empire, and as the location of several important cities along the Silk Road.

The Gobi measures over 1600 km from southwest to northeast and 800 km from north to south. The desert is widest in the west, along the line joining the Baghrash Kol and the Lop Nor (87°-89° east). It occupies an arc of land 1,300,000 sq km in area, making it one of the largest deserts in the world. Contrary to images often associated with a desert, much of the Gobi is not sandy but is covered with bare rock.

The Gobi has several alternative Chinese names, including sha-mo (sand desert) and han-hal (dry sea). In its broadest definition, the Gobi includes the long stretch of desert and semidesert country extending from the foot of the Pamirs, 77° east, to the Great Khingan (Da Hinggan) Mountains, 116°-118° east, on the border of Manchuria; and from the foothills of the Altai, Sayan, and Yablonoi Mountains on the north to the Kunlun Shan, Altun Shan, and Qilian Shan ranges, which form the northern edges of the Tibetan Plateau, on the south.

A relatively small area on the east side of the Great Khingan range, between the upper waters of the Songhua (Sungari) and the upper waters of the Liao-ho, is also reckoned to belong to the Gobi by conventional usage. On the other hand, geographers and ecologists prefer to regard the west extremity of the Gobi region (as defined above), the basin of the Tarim in Xinjiang and the desert basin of Lop Nor and Hami (Kumul) as forming a separate and independent desert, called the Taklamakan.

This article is licensed under the GNU Free Documentation License. It uses material from the Wikipedia article "Gobi Desert ".