Buddhism is a religion and philosophy based on the teachings of the Buddha, Siddhārtha Gautama, who lived between approximately 563 and 483 BCE. Originating in India, Buddhism gradually spread throughout Asia to Central Asia, Sri Lanka, Tibet, Southeast Asia, as well as the East Asian countries of China, Mongolia, Korea, and Japan.

Buddhism teaches followers to perform good and wholesome actions, to avoid bad and harmful actions, and to purify and train the mind. The aim of these practices is to end the suffering of cyclic existence, samsara, by awakening the practitioner to the realization of true reality, the achievement of Nirvana and Buddhahood.

While Buddhism does not deny the existence of supernatural beings (indeed, many are discussed in Buddhist scripture), it does not ascribe power for creation, salvation or judgement to them. Like humans, they are regarded as having the power to affect worldly events, and so some Buddhist schools associate with them via ritual. 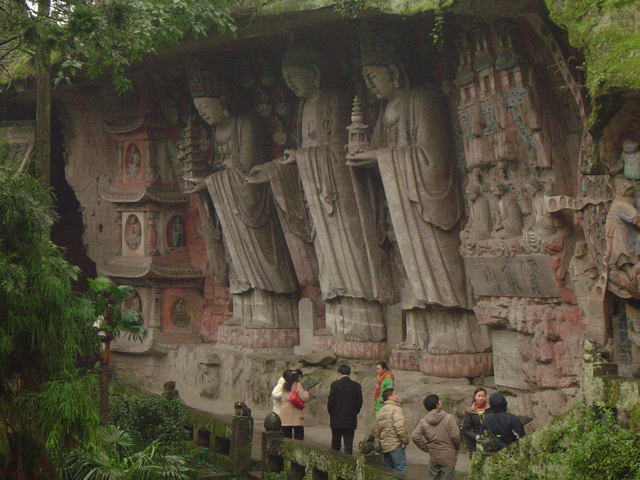 Buddha is a word in ancient Indian languages including Pāli and Sanskrit which means "one who has awakened". It is derived from the verbal root "budh", meaning "to awaken" or "to be enlightened", and "to comprehend".

The word "Buddha" denotes not just a single religious teacher who lived in a particular epoch, but a type of person, of which there have been infinite ones throughout the course of cosmic time. (As an analogy, the term "American President" refers not just to one person, but to everyone who has ever held the office of American presidency.) The Buddha Siddhartha Gautama, then, is simply one member in the spiritual lineage of Buddhas, which stretches back into beginningless past and forward into the distant horizons of the future.

Gautama, who is referred to by Buddhists as Shakyamuni Buddha, did not claim any divine status for himself, nor did he assert that he was inspired by a god or gods. A Buddha is anyone who has fully awakened to the true nature of existence, liberated from the cycle of birth, death, and rebirth and has achieved omniscience. (Buddhas are not omnipotent, like the god of Judaism, Christianity or Islam.) Anyone can free themselves from suffering as Gautama did, regardless of age, gender, or caste.

The principles by which a person can be led to enlightenment are known as the Buddhadharma, or simply the Dharma, meaning (in this context) "law, doctrine, or truth".
Buddhists seek refuge in what are often referred to as the Three Jewels, Triple Gem or Triple Jewel. These are the Buddha, the Dharma (or Dhamma), and the "noble" (Sanskrit: arya) Sangha or community of monks and nuns who have become enlightened. While it is impossible to escape one's karma or the effects caused by previous thoughts, words and deeds, it is possible to avoid the suffering that comes from it by becoming enlightened. In this way, dharma offers a refuge. Dharma, used in the sense of the Buddha's teachings, provides a raft and is thus a temporary refuge while entering and crossing the river. However, the real refuge is on the other side of the river.

To one who is seeking to become enlightened, taking refuge constitutes a continuing commitment to pursuing enlightenment and following in the footsteps of the people who have followed the path to enlightenment before. It contains an element of confidence that enlightenment is in fact a refuge, a supreme resort. Many Buddhists take the refuges each day, often more than once in order to remind themselves of what they are doing and to direct their resolve inwardly towards liberation.

In all— forms of Buddhism, refuge in the Three Jewels are taken before the Sangha for the first time, as a part of the conversion ritual. However, the personal choice for taking ones' life-path in this direction is more important than any external ritual. 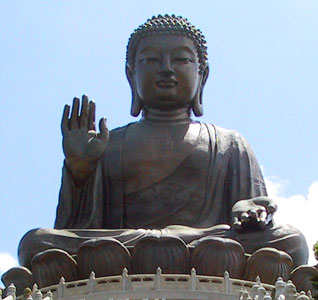 It is good to note that in Buddhism, the word "refuge" should often not be taken in the English sense of "hiding" or "escape"; instead, many scholars have said, it ought be thought of as a homecoming, or place of healing, much as a parent's home might be a refuge for someone. This simple misunderstanding has led some Western scholars to conclude that Buddhism is "a religion for sticking one's head in the sand", when most Buddhists would assert quite the opposite. On the other hand, the main goal of Buddhism is to escape from the suffering of cyclic existence.

Although Buddhists concur that taking refuge should be undertaken with proper motivation (complete liberation) and an understanding of the objects of refuge, the Indian scholar Atisha identified that in practice there are many different motives found for taking refuge. His idea was to use these different motivations as a key to resolving any apparent conflicts between all the Buddha's teachings without depending upon some form of syncretism that would cause as much confusion as it attempted to alleviate.

In the 11th century, Lamp for the Path by Atisha, and in the subsequent Lamrim tradition as elaborated by the Tibetan master Tsongkhapa, the several motives for refuge are enumerated as follows, typically introduced using the concept of the "scope" (level of motivation) of a practitioner:

Worldly scope: to improve the lot of this life - but this is not a Buddhist motivation.

High scope: to achieve Buddhahood in order to liberate others from suffering

Highest scope is also sometimes included: to achieve Buddhahood in this life.

The Buddha taught that life was dissatisfactory because of craving, but that this condition was curable by following the Eightfold Path. This teaching is called the Four Noble Truths:

In order to fully understand the noble truths and investigate whether they were in fact true, Buddha recommended that a certain lifestyle or path be followed which consists of:

Sometimes in the Pāli Canon the Eightfold Path is spoken of as being a progressive series of stages which the practitioner moves through, the culmination of one leading to the beginning of another, but it is more usual to view the stages of the 'Path' as requiring simultaneous development.

The Eightfold Path essentially consists of meditation, following the precepts, and cultivating the positive converse of the precepts (e.g. benefiting living beings is the converse of the first precept of harmlessness). The Path may also be thought of as a way of developing śīla, meaning mental and moral discipline. 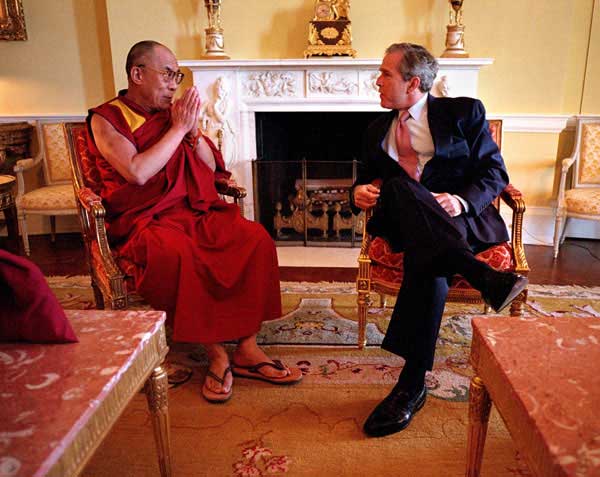 Buddhists undertake certain precepts as aids on the path to coming into contact with ultimate reality. Laypeople generally undertake five precepts. The Five Precepts are not given in the form of commands such as "thou shalt not ...", but rather are promises to oneself: "I will (try) to...".

The five precepts are:

It should be noted that the literal, and possibly original, meaning of the third precept covers more than the now generally standard meaning "sexual misconduct" and actually involves refraining from "wrong indulgence in all sensory pleasures".

In some schools of Buddhism, serious lay people or aspiring monks take an additional three to five ethical precepts, and some of the five precepts are strengthened. For example, the precept pertaining to sexual misconduct becomes a precept of celibacy; the fourth precept, which pertains to incorrect speech, is expanded to four: lying, harsh language, slander, and idle chit-chat. Fully ordained monks and nuns of the Theravada school also vow to follow the 227 patimokkha rules. Fully ordained Mahayana monks and nuns follow 348 equivalent rules with an additional set of, generally, 41 bodhisattva vows.

This article is licensed under the GNU Free Documentation License. It uses material from the Wikipedia article "Buddhism".