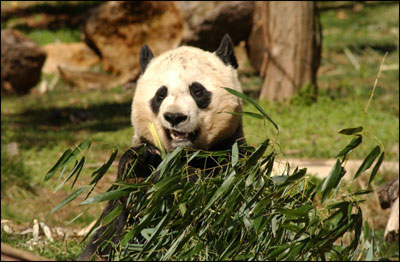 The Giant Panda (Ailuropoda melanoleuca "black-and-white cat-foot") is a mammal now usually classified in the bear family, Ursidae, that is native to central China.

The Giant Panda lives in mountainous regions, like Sichuan and Tibet. The Giant Panda is the symbol of the World Wildlife Fund (WWF), a conservation organization. Toward the latter half of the 20th century, the panda also became somewhat of a national emblem for China, and is now used in Chinese gold coins.

Despite being taxonomically a carnivore, their diet is overwhelmingly herbivorous. They eat shoots and leaves, living almost entirely on bamboo. Pandas are also known to eat eggs and some insects along with their bamboo diet. These are necessary sources of protein.

Giant pandas reproduce very slowly, and infant mortality is high. Growth is slow and pandas may not reach sexual maturity until they are from five to seven years old. The mating season usually takes place from mid-March to mid-May. During this time, up to two to five males can compete for one female; the male with the highest rank gets the female. When mating, the female is in a crouching, head-down position as the male mounts from behind. Copulation time is short, ranging from thirty seconds to five minutes, but the male may mount repeatedly to ensure successful fertilization. Mating is also a very noisy time, accompanied by moaning and squealing.

The whole gestation period ranges from 83 to 163 days, with 135 days being the average. Baby pandas weigh only 90 to 130 grams, which is about 1/900th of the mother’s weight, which is the biggest proportion in difference of the mother’s and child’s weight in all animals. Usually, the female panda gives birth to one to two panda cubs. Since the baby panda is born very small and helpless, they need the mother’s undivided attention, so she is only able to care for one of her cubs. She usually abandons her weaker cub in a cave or tree, and it dies soon after birth. 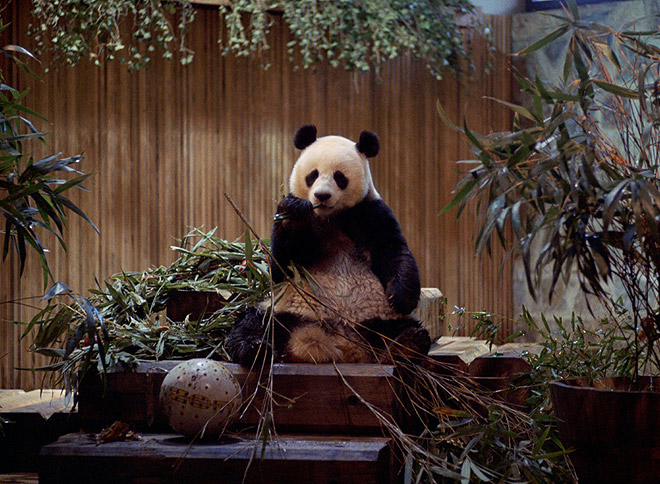 The father has no part in helping with raising the cub. When the cub is first born, it is pink, naked and blind and sucks from its mothers breast 6-14 times a day for 30 minutes each time. For three to four hours, the mother might leave the den to feed, which leaves the panda cub defenseless. Two weeks after birth, their skin turns gray where the hair will eventually become black. A month after their birth, the color pattern of the cub’s fur is fully developed. The cub begins to crawl at 75 to 90 days and the mothers play with their cubs, by rolling and wrestling with them. The cubs are able to eat bamboo after 6 months and the cub weighs 45 kilograms at one year and lives with their mother until they are 18 months year old. The interval between births is 2 years.

For many decades the precise taxonomic classification of the panda was under debate as both the Giant Panda and the distantly related Red Panda share characteristics of both bears and raccoons. However, genetic testing has revealed that Giant Pandas are true bears and part of the Ursidae family. Its closest bear relative is the Spectacled Bear of South America. Disagreement remains about whether or not the Red Panda belongs in Ursidae or the raccoon family, Procyonidae.

Giant Pandas are an endangered species, threatened by continued loss of habitat and by a very low birthrate, both in the wild and in captivity. About 1,600 are believed to survive in the wild.

The Giant Panda has an unusual paw, with a "thumb" and five fingers; the "thumb" is actually a modified wrist-bone. Stephen Jay Gould wrote an essay about this, then used the title The Panda's Thumb for a book of collected essays. 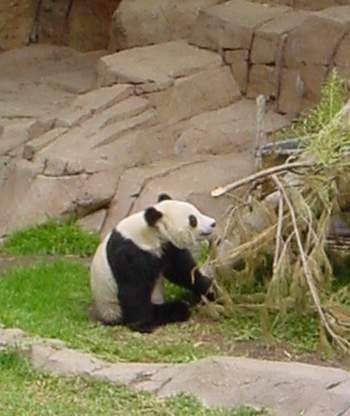 The Giant Panda was first made known to the West in 1869 by the French missionary Armand David. The Giant Panda has long been a favourite of the public, at least partly on account of the fact that the species has an appealing baby-like cuteness that makes it seem to resemble a living teddy bear. The fact that it is usually depicted reclining peacefully eating bamboo, as opposed to hunting, also adds to its image of innocence.

Loans of Giant Pandas to American and Japanese zoos formed an important part of the diplomacy of the People's Republic of China in the 1970s as it marked some of the first cultural exchanges between the PRC and the West.

By the year 1984, however, pandas were no longer used as agents of diplomacy. Instead, China began to offer pandas to other nations only on 10-year loans. The standard loan terms include a fee of up to US$1,000,000 per year and a provision that any cubs born during the loan are the property of the People's Republic of China.

In 1998 a lawsuit filed by the WWF spurred the U.S. Fish and Wildlife Service to require U.S. zoos seeking to import pandas to ensure that half of the fee charged by China be channeled into conservation efforts for wild pandas and their habitat before the service will issue a permit allowing the pandas to be imported.

This article is licensed under the GNU Free Documentation License. It uses material from the Wikipedia article "Panda".