The Great Pyramid of Giza, (sometimes spelled Gizeh) is the oldest, and last remaining of the Seven Wonders of the World and the most widely recognized pyramid in the world. Though no Pharaoh has ever been found buried in any Egyptian pyramid, it is presumed by egyptologists to have been built as a tomb for the Fourth dynasty Egyptian Pharaoh Khufu (also known under his Greek name Cheops), after whom it is often called Khufu's Pyramid or the Pyramid of Khufu.
At construction (vc) the Great Pyramid was 280 Egyptian Old Royal Cubits tall (146.5 metres or 481 feet), but due to erosion and the theft of its topmost stone (the so-called pyramidion) its current height is approximately 137 m. The Great Pyramid covers approximately 5.5 hectares (55,000 m²) at its base. As has been proven by papyrus documents, each side measured in Antiquity 440 Old Royal Cubits (230.5 m). Today each side has a length of approximately 227.5 m. The reduction in area and the current "rough hewn" appearance of the structure is due to the removal of the polished white limestone casing stones most of which were shaken loose by a massive earthquake in the 14th century and subsequently carted off and used as building material for much of early Cairo.

For four millennia it was the world's tallest building, not being surpassed until the 160-metre tall spire of Lincoln Cathedral was completed in around 1300CE. The accuracy of work is such that the four sides of the base have a mean error of only 15 mm in length, and 12 seconds in angle from a perfect square. The sides of the square are aligned quite precisely in North-South and East-West directions. The sides of the pyramid rise at an angle of approximately 51°51′. 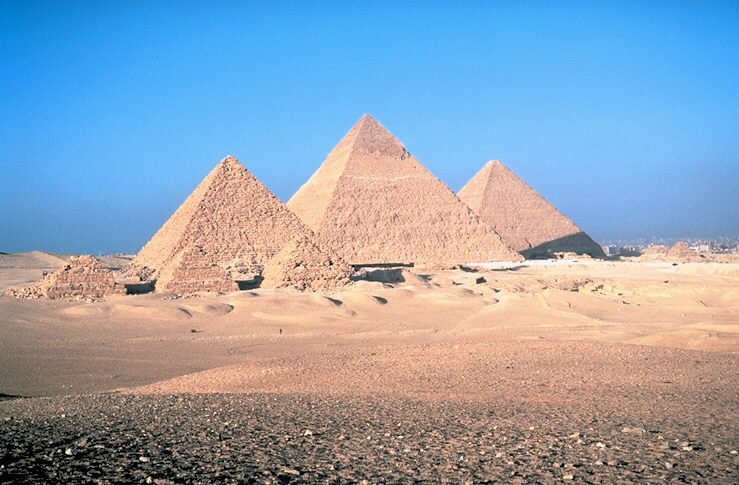 A wonder of the ancient world in their own right, the casing stones of the Great Pyramid were cut with optical precision many of which being off of true plane for their entire surface area by as little as 1/50th of an inch as well as being fit so perfectly together that the tip of a knife could not be inserted between their joints along any edge even to this day. Another interesting feature is that the light reflected by the Great Pyramid being encased in this precision laid, highly polished, bone-white limestone could be seen miles away even under moonlight.

The Great Pyramid differs in its internal arrangement from the other pyramids in the area. The greater number of passages and chambers, the high finish of parts of the work, and the accuracy of construction all distinguish it. The walls throughout the pyramid are predominantly bare and uninscribed. Three chambers are arranged centrally, on the vertical axis of the pyramid. The lowest chamber is cut in the bedrock upon which the pyramid was built; it is the largest of the three and appears to be unfinished, roughly cut in stone. The middle chamber or "queen's chamber" is the smallest, measuring approximately 5.74 by 5.23 metres, and 4.57 metres in height. Its eastern wall has a large angular doorway or niche, and two narrow shafts, about 20 centimeters wide, extending from the chamber to the outer surface of the pyramid, blocked by limestone "doors" at several points. Egyptologist Mark Lehner believes that the chamber was intended as a serdab—a structure found in several other Egyptian pyramids—and that the niche would have contained a statue of the king, but the true purpose of the chamber remains a mystery.

The uppermost chamber or "king's chamber," approximately 10.45 by 5.20 metres and 5.80 metres high, bears shafts similar to those in the middle chamber. It has an antechamber adjoining via a small doorway, and a flat ceiling composed of nine large granite blocks, separated by five small relief chambers. It contains a huge granite sarcophagus which must have been placed in it during construction; it is too large to pass through the tiny passageway of the burial chamber.

A descending passage leads from the entrance of the pyramid to the underground chamber. About half-way along, a second passage ascends towards the upper chambers. This again breaks into two corridors, one horizontal, leading to the 'queen' chamber, and the other still ascending, leading into the burial chamber. This final asscending corridor is a fantastic space with a height of aprox. 8 metres, which earned it a name of 'grand gallery'. The grand gallery leans next to the walls of the burial chambers, and is connected with it through a tiny, tight passageway.

This passageway once contained crude stone mechanisms for one-time release of huge granite blocks which sealed the entrance into the burial chamber. The grand gallery also contained some sort of mechanism for the release of a huge stone block which plugged the ascending passage. The entire upper part of the pyramid was thus sealed after the burial of the king. There was one secret passage that was not sealed, leading through the very rock upon which the pyramid was built, towards the descending passage and outside the pyramid, through which the last of the workers and funerary priests could escape after the burial of the king.

Apart from accessible chambers and corridors, the Great Pyramid also holds inaccessible spaces. The so-called 'air shafts' are canals which run through the stone mass of the pyramid at certain angles, connecting the burial chamber of the king with the north and south face of the pyramid outside. Why these were planned and built is not known, although they were certainly not 'air' or 'ventilation' shafts. It is possible that they had a symbolic meaning, allowing the soul of the deceased king to travel to the stars in the north and south sky, which were important in Egyptian religion and mythology.

Another interesting feature of the Great Pyramid are the so-called 'relieving chambers'. This is an ingenious system raised over the king's burial chamber, constructed to relieve vertical and horizontal loads. The relatively thin wall between the burial chamber and the grand gallery likely could not absorb all of the horizontal pressure from the granite roof of the chamber. Thus, the granite roof had to be raised above the level of grand gallery. However, this created another problem, since now the walls of the burial chamber would be more than 8 meters high, and thus very unstable. Thus, huge granite slabs were placed horizontally as stabilisers between the walls, one above another. The empty spaces between granite slabs today are called 'relieving' chambers, though they were never meant to be accessed; and were not until the 19th century, when they were opened by dynamite. This, turned out to be an incredibly valuable discovery. Since the 'relieving chambers' were never meant to be accessed, the stone blocks on their walls were not prepared and laid as carefully as those in the accessible interior of the pyramid. Thus, graffiti of the pyramid workers were found inscribed on some of the blocks, mentioning the names of the worker crews which built the pyramid (or at least placed these particular stones), and the year of rule and the name of the pharaoh who had the pyramid built: Khufu. The Great Pyramid is otherwise completely empty of any inscriptions or hieroglyphs whatsoever. This is the only evidence which proves that pharaoh Hor Medjedu Khnum Khufu had the Great Pyramid built, and that this is, in fact, the legendary king which Herodotus calls Kheops.

This article is licensed under the GNU Free Documentation License. It uses material from the Wikipedia article "The Great Pyramid of Giza ".