The Maasai or Masai, an indigenous African tribe of semi-nomadic people located primarily in Kenya and northern Tanzania, are probably one of the most familiar tribes of East Africa. Despite the growth of modern civilization, the Maasai have largely managed to maintain their traditional ways, although this becomes more challenging each year. 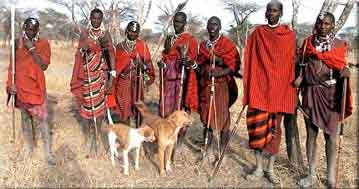 The estimated total population of the Maasai people is about 900,000, with about 350,000-453,000 Maasai living in Kenya. The accuracy of these statistics is in question, however, due to the inefficiencies of government census in the region.

The Maasai are part of the Nilotic family of African tribal groups, and probably migrated from the Nile valley in Sudan to central and south-western Kenya and northern Tanzania sometime after 1500 AD, bringing their domesticated cattle with them. Although other African tribes organised themselves into civilisations and kingdoms, the Maasai never quite surrendered their semi-nomadic lifestyle. However, the clans in Kenya (not in Tanganyika) were united in the 1870, under the politcial and military leadership of a Laibon (styled Paramount Chief in 1904) and an Orkoiyoi, both originally religious leaders; their tribal territory was included in British East Africa in 1888, the chiefdom was abolished in 1918. 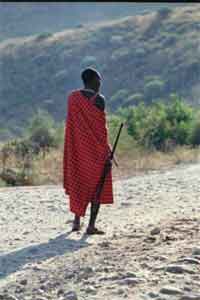 The ability to graze their cattle over large territories has diminished considerably in recent years, due to increased urbanisation and the declaration of the Maasai Mara and Serengeti game reserves, which was all formerly Maasai grazing land. Despite their reputation as fierce warriors, Maasai culture revolves around their cattle. One of their spiritual beliefs is that their rain god Ngai gave all cattle to the Maasai people, and therefore anyone else who possesses cattle must have stolen them from the Maasai. This has led to some fatal altercations with other tribes of the regions over the centuries when the Maasai attempt to reclaim their "property". The huts of the Maasai are built from dried cattle dung, and certain sacred rituals involve the drinking of cow blood.

There are numerous traditions and ceremonies performed by Maasai men. Perhaps best known is the warrior "jumping" dance, where young Maasai morani (warrior-youth) leap into the air from a standing position, in order to demonstrate their strength and agility. Until recent times, in order to earn the right to have a wife, a Maasai moran was required to have killed a lion. Officially this practice has stopped, although there is evidence that it continues in the more remote regions of Kenya. Also in earlier times a group of young boys were required to build a new village and live in it for a lengthy period (often years) as part of the passage to manhood. This practice is dying out due to lack of land.

Unlike many tribal cultures, Maasai women have a strong voice in their culture. Maasai women are easily identified by their shaved heads, bright clothing and beads, and the removal of one of the bottom teeth (for both sexes). Circumcision is performed on both sexes, with the elder men circumcising the teenage boys (who are not permitted to make a noise during the ceremony), and the elder women circumcising the teenage girls (for whom crying is permitted). Attempts by the Kenyan government to stamp out female circumcision have failed, primarily due to the fact that it is the Maasai women who defend the practice, not the men.

This article is licensed under the GNU Free Documentation License. It uses material from the Wikipedia article "Maasai".