Ark of the Covenant

The Ark of the Covenant is described in the Old Testament as a sacred container built at the command of Moses, wherein rested the stone tablets containing the Ten Commandments. The Ark and its sanctuary were "the beauty of Israel" .

During the journeys of the Israelites, the Ark was carried by the priests in advance of the host . The Ark was borne by priests into the bed of the Jordan, which separated, opening a pathway for the whole of the host to pass over. The Ark was moreover borne in the procession round Jericho. When carried, the Ark was always wrapped in a veil, in badger skins, a blue cloth, and was carefully concealed, even from the eyes of the Levites who carried it.

The Bible describes the Ark as made of acacia or shittah-tree wood. It was a cubit and a half broad and high and two cubits long (about 130 × 80 × 80 cm). The Ark was covered all over with the purest gold. Its upper surface or lid, the mercy seat, was surrounded with a rim of gold.

A late 19th-century artist's conception of the Ark of the Covenant.

On each of the two sides were two gold rings, wherein were placed two wooden poles (with a decorative sheathing of gold), whereby the ark could be carried. Over the Ark, at the two extremities, were two cherubim, with their faces turned toward one another. Their outspread wings over the top of the ark formed the throne of God, while the ark itself was his footstool . The Ark was deposited in the "Holy of Holies," and was placed so that one end of the poles whereby it was carried touched the veil separating the two compartments of the tabernacle.

According to the Bible, the two tablets of stone constituting the "testimony" or evidence of God's covenant with the people were kept within the Ark itself. The Tanakh states that there "was nothing in the ark save the two tables of stone". Some see this as contradictory with other verses, claiming the presence of the "pot of manna" , and "Aaron's rod that budded" before the Ark . The items were placed "before the Ark with the testimony"; the correct meaning of that phrase is open to interpretation. 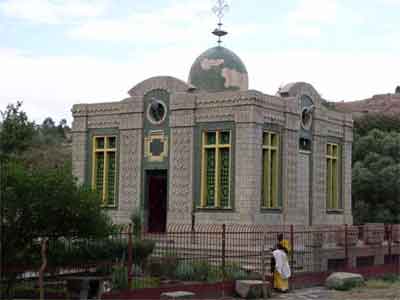 Outbuilding supposedly containing the Ark of the Covenant at Tzion Maryam church in Axum Ethiopia. Photo by Adam Cohn.

The Ethiopian Orthodox Church in Axum, Ethiopia claims to still possess the Ark of the Covenant. Local tradition maintains that it was brought to Ethiopia by Menelik I following a visit to his father King Solomon. Although it was once paraded before the town once each year, it is now kept under constant guard in a "treasury" near the Church of Our Lady Mary of Zion, and only the head priest of the church is allowed to view it. Most Western historians are skeptical of this claim.

This article is licensed under the GNU Free Documentation License. It uses material from the Wikipedia article "Ark of the Covenant ".