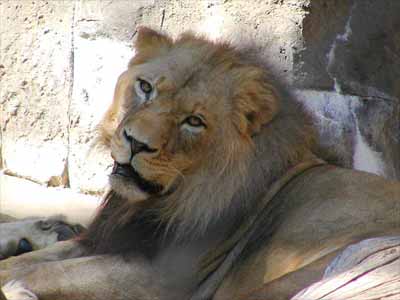 The Lion (Panthera leo) is a mammal of the family Felidae. The male lion, easily recognized by his mane, may weigh up to 250 kg (550 lb). Females are much smaller, weighing up to 180 kg (400 lb). In the wild lions live for around 10–14 years, while in captivity they can live over 20. Lions are carnivores who live in family groups, called prides, consisting of related females, their cubs of both sexes, and an unrelated male who mates with the adult females. The females do the hunting for the pride while the males are largely occupied with maintaining the borders of their territory. Males are expelled from the pride when they reach maturity. When or if a male takes over a pride and ousts the previous lead male, the conqueror may kill any cubs left in the pride that are not his. Lions are one of the most sexually active cats. During a female's estrus cycle, a male and female will mate unabated for 5-7 days every 10 to 20 minutes. However, it takes 6-9 estrus cycles for the female to become pregnant.

Despite being popularly known as the "king of the jungle", the lion is an animal of the open plains, and can be found throughout Africa. It is nevertheless a threatened species with significant populations being limited to national parks in Tanzania and South Africa. Before the rise of man, the species existed on more territory than any other land mammal. 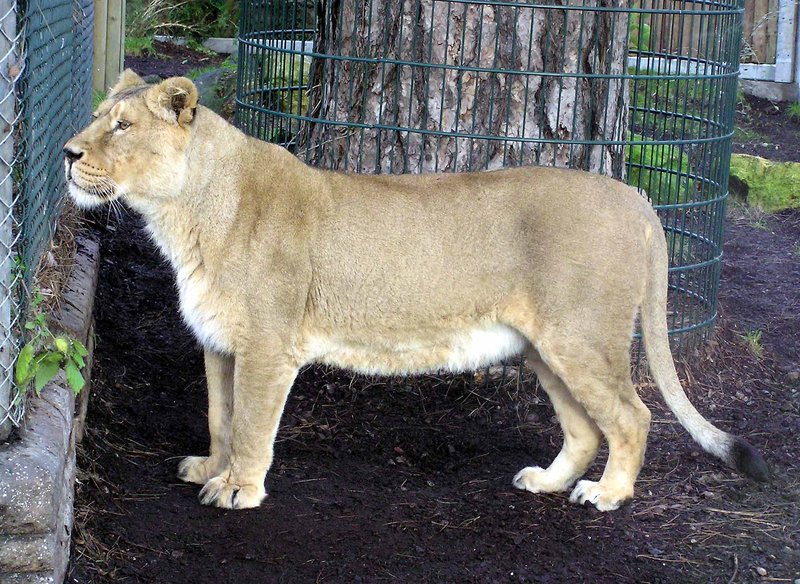 The last remnant of the Asiatic Lion (subspecies Panthera leo persica), which in historical times ranged from Greece to India through Persia, lives in the Gir Forest of northwestern India. About 300 lions live in a 1412 km² (about 550 square miles) sanctuary in the state of Gujarat.

Lions had become extinct in Greece, their last European outpost, by 100 AD, but they survived in considerable numbers in the Middle East and North Africa until the early 20th century. The lions that used to live in North Africa, called Barbary lions, tended to be larger than the sub-Saharan ones, and the males had more extensive manes. They are thought to have been a subspecies of lion (Panthera leo leo), although this has not been confirmed. Other extinct subspecies are the Cape Lion, and the European Cave Lion (subspecies Pathera leo spelaea) which coexisted with humans throughout the last Ice Age.

Lions are recurring symbols in the coat of arms of royalty and chivalry. Lions appear in the art of China, even though lions have never lived in China. No animal has been given more attention in art and literature. C.A.W. Guggisberg, in his book Simba, says the lion is referred to 130 times in the Bible. The lion can be found in stone age cave paintings.

Although they are not often heard of due to their rarity, white lions do exist, in Timbavati, South Africa. There is a recessive gene in white lions that gives them their unusual color (also causing white tigers, many white tigers with this gene are bred for zoos and animal shows). A white lion has a disadvantage when it comes to hunting; their white color can give away their hiding place.

This article is licensed under the GNU Free Documentation License. It uses material from the Wikipedia article "Lion".